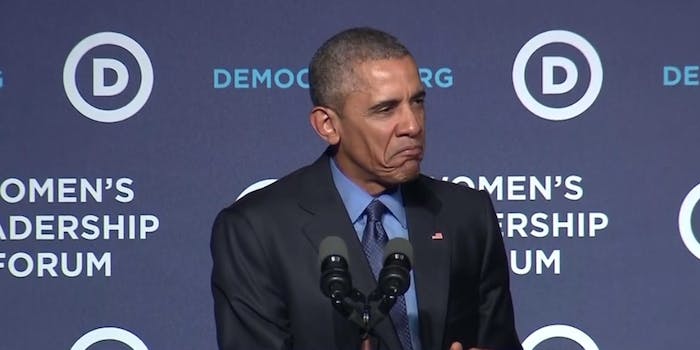 Finally, we get to see Obama’s Grumpy Cat impression

He's the President, and he evoked a popular Internet cat for laughs.

President Obama did a meme.

Speaking Friday at the Democratic National Committee’s meeting of the Women’s Leadership Forum, Obama made some jokes comparing Republicans to Grumpy Cat, a 3-year-old cat whose underbite and dwarfism gives it an expression that appears stuck in a permanent frown.

“Why is it Republican politicians are so down on America?” Obama asked. “I mean, they are gloomy.” He paused for effect, then added, “They’re like Grumpy Cat,” and mimicked the cat’s expression for laughs.

Tardar Sauce, as the cat’s actually named, has been wildly popular online since 2013, when it won “best meme” awards and landed what was supposed to be a movie deal.

There’s a spotty history of politicians, especially congressional Republicans for some reason, trying to use memes to engage with constituents on Twitter.

redditors: need help. Where do I upload memes? r/pics? I'd like to add Wonka on Obama: https://t.co/zEeVBQXk cc @reddit

Given politicians’ readiness to embrace Internet culture, it’s entirely possible one will be funny with a meme in the future.