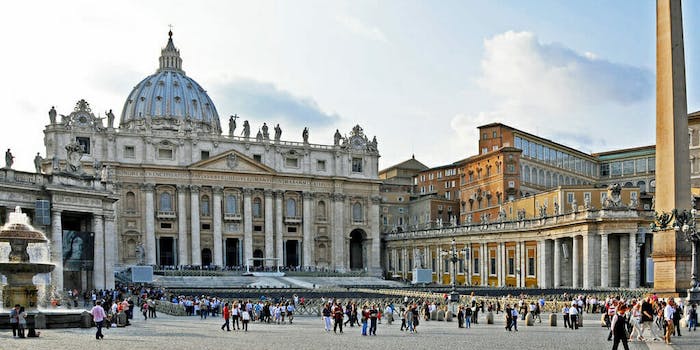 Pope Francis has his own track team now—and people can’t stop making jokes about it.

Although Vatican City is located inside of Rome, Italy, it has been an sovereign state since 1929, meaning there’s no reason the Holy See can’t start its own sports teams and compete in international competitions, including the Olympics.

The Vatican launches athletics team and targets the Olympics https://t.co/bs6LI1gCp5 via @IrishTimesSport

With a population of only around 1,000 people, Vatican City doesn’t have a large pool of athletic talent to draw from. Although Pope Francis himself has no plans to compete, priests, nuns, and members of the Pontifical Swiss Guard have all joined up and started training.

“The dream that we have often had is to see the Holy See flag among the delegations at the opening of the Olympic Games,” said Monsignor Melchor Jose Sánchez de Toca y Alameda, the team president and the head of the Vatican’s sports department, according to the Irish Times.

The team has even entered into an agreement with the Italian National Olympic Committee that allows it access to the same medical, scientific and coaching resources as Italian athletes.

Giovanni Malago, president of the Italian National Olympic Committee, joked with Vatican officials at the launch celebration on Thursday, saying, “just don’t get too big.”

He’s not the only one having a laugh. As soon as Twitter found out that the Pope had his own track team, the jokes came pouring in.

They should be allowed, so long as they compete in those Swiss guard fits pic.twitter.com/Lzp0kWY17l

You can follow their Olympic progress with the hashtag #TeamGod.

Going to dominate the steeplechase!

Non Catholic person: The Catholic Church is too traditional

Not all of the responses were positive. Many used the news to remind people of the many sexual abuse allegations made against the Roman Catholic Church.

We gotta train kids to be faster now.

Vatican pharmacist Michela Ciprietti, who is part of the team, said it wants to send a positive message. He told the Irish Times the participants not only wish to compete but to “promote culture and running and launch the message of solidarity and the fight against racism and violence of all types.”

The team will take part in its first official race on Jan. 20 in the La Corsa di Miguel, a 10-kilometer race that takes place in Rome.