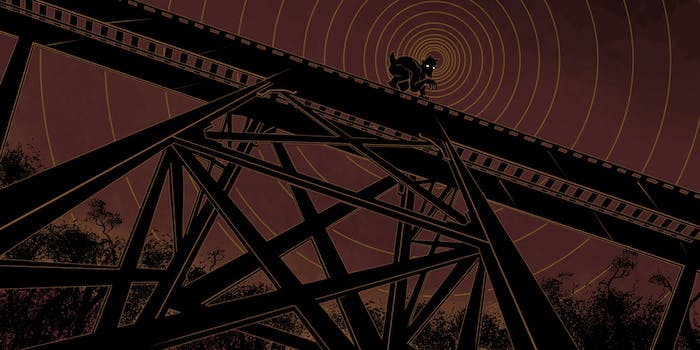 The strange, unexplained, and deadly allure of the Pope Lick Monster

People are dying in search of the legend.

Roquel Bain and her boyfriend didn’t see the train coming until it was too late. Bain, a 26-year-old surgical assistant from Ohio, had traveled to Louisville, Kentucky for a late-night paranormal tour of a local sanatorium. With hours to spare beforehand, they found themselves on a trestle bridge nearly 100 feet above Pope Lick Creek, investigating the legend of a half-man, half-goat monster who lures humans to their deaths.

Many believe trains no longer run over the infamous Pope Lick bridge, but they do. Norfolk Southern Railway’s freight trains pass by several times each day, carrying coal and other cargo, and the railroad has warned monster-chasers to stay away.

So when Bain and her boyfriend made it onto the bridge on a Saturday night, April 23, they may not have known they were in danger. Although they had to contend with an eight-foot-tall security fence, they surely didn’t expect to see a train rolling toward them at 32 miles per hour. 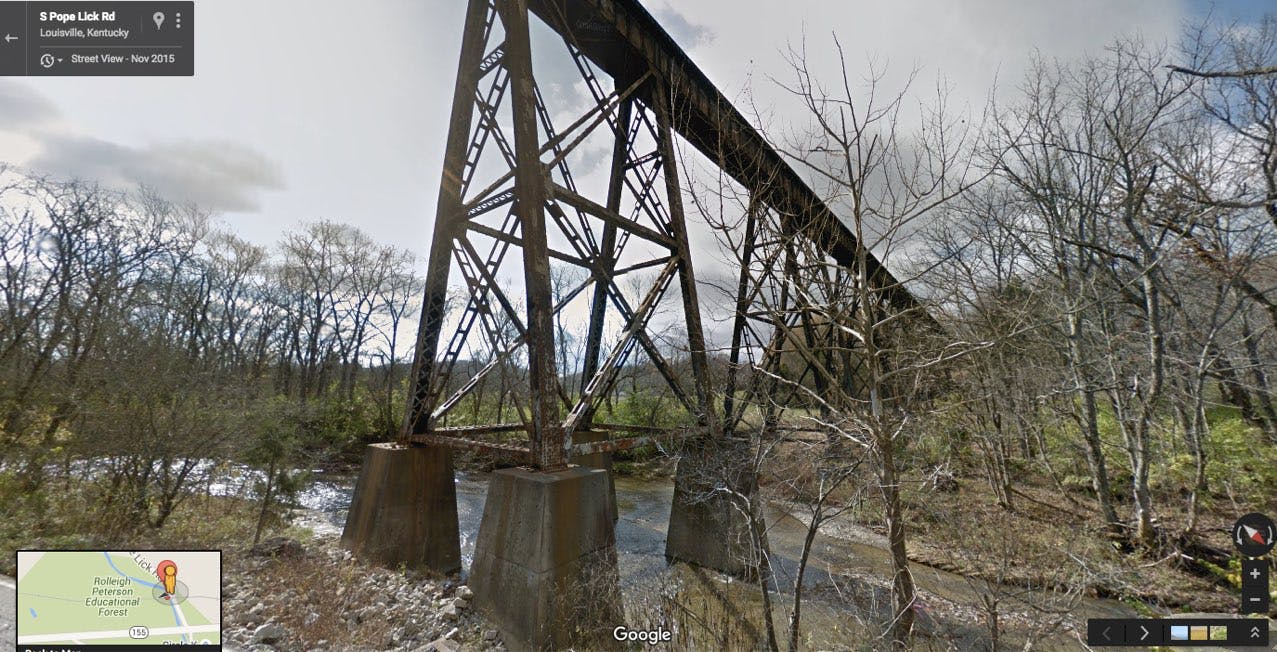 According to numerous sources about the urban legend, the Pope Lick bridge is 772 feet long and 90 feet high. People have committed suicide by jumping from it, and outrunning a train to the other side is nearly impossible.

The only means of escape, as depicted in The Legend of the Pope Lick Monster, a black-and-white 1988 short by local filmmaker Ron Schildknecht, is to hang off the side of the bridge while the train passes—a feat that requires tremendous strength and stamina.

It’s not clear whether the young couple had seen the movie, but they tried the same thing.  Roquel Bain’s boyfriend managed to hold on. He climbed back on top of the trestle and was later rescued by the fire department, according to the Louisville Courier-Journal.

But Bain wasn’t as quick. Struck by the train, she fell between 80 and 90 feet to the street below and was pronounced dead around 8pm.

Jeffersontown deputy coroner Jack Arnold told the Courier-Journal that, although he’s investigated deaths at the bridge before, Bain was officially the first to die chasing the Pope Lick Monster.

Unofficially, the monster has claimed many more victims. According to local legend, memorialized in John E. Kleber’s Encyclopedia of Louisville, the beast uses hypnosis to draw its victims onto the train tracks. Stupefied, they’re unable to move until they’re roused by the sound and vibration of an oncoming locomotive.

The monster has existed as a local Louisville legend since at least the 1960s. Accounts of its origins conflict, but two narratives dominate. In one version, the monster is a lonely circus freak, an escapee from a derailed train who’s now bent on revenge against mankind. In another, it was farmer who gained supernatural powers—and a misshapen form—after sacrificing his goats to Satan.

Sometimes it’s described as part goat, and elsewhere as a goat-sheep hybrid. According to one cryptozoological website, it has a curved nose and “short, sharp horns… nestled in long, greasy hair.” Fur covers its muscular legs.

It’s been said to hypnotize with a stare, or lure people by mimicking familiar voices. And it also carries a bloody axe, because that’s how these things tend to work. Some suggest it also travels with a pack of wild goats.

In certain versions of the story, the sight of the monster is so terrifying that it drives victims to jump to their deaths. In other versions, the monster’s hypnosis keeps its prey on the bridge until a train arrives to finish them off.

There have been no confirmed sightings of the monster and no deaths attributed to it. But that hasn’t stopped the monster—or the myth of its existence—from claiming victims.

Climbing the “haunted” Pope Lick Bridge is a dare for bored, thrill-seeking local teens, and it’s a tradition for high school senior boys. Thus far, at least three of them have died in the attempt.

Paranormal author J. Nathan Couch, who visited the bridge in 2013, writes that there were two deaths resulting from daredevil antics on the bridge in 1987, just months apart:

Jack “J.C.” Charles Bahm II, a 17-year old Spalding University student, was struck and killed by a train February 18, 1987 while crossing the trestle. He has since been eulogized at the site of his death. “JC we love and miss you” is spray painted on the trestle’s base. In May 1987, 19-year-old David Wayne Bryant died of injuries obtained in 1986 when he jumped from the trestle to dodge an oncoming locomotive.

Then, in ’88, Schildknect’s film about the monster arrived and changed everything. He took a legend that had circulated in the Louisville Area for generations—the trestle was built in 1929—and codified it in media for the first time.

“What interested me were the stories people told when they went out to the trestle and the kind of things that happened to them,” Schildknecht told the College Heights Herald. “Things like kids going on out there banging their hands on the hoods of their cars, scaring their girlfriends, going out there chanting Pope Lick, Pope Lick.”

The stories were mostly harmless fun, a good scare. But Schildknecht was just weeks into filming Legend of the Pope Lick Monster when J.C. Bahm fell from the bridge.

The deaths that year, combined with the hype around the local film, drew the attention of Norfolk Southern, the large national railroad that moves freight across the bridge. Signs were posted and a chain-link fence topped with barbed wire was erected.

An audio warning about the dangers of the tracks, provided by the railroad, played before showings of the film, according to the Herald. In spite of—or perhaps because of—the warning campaign, the allure of the Pope Lick Bridge and its monster persisted. On the night of the movie’s premiere, two boys were stopped by police trying to make it to the bridge, Couch wrote.

Then, in 2000, 19-year-old Nicholas Jewell fell to his death trying to hang off the trestle until a train passed.

That was the last death until Roquel Bain’s. In the intervening time, the Internet happened in a huge way, transforming former local legends into national tourist attractions. What used to be a scary story passed down through generations of Louisville teens is now a well-documented online phenomenon.

There’s an article about the monster on Atlas Obscura, the Internet’s catalog of strange and fascinating locations. It’s covered in cryptozoological wikis, on “legend tripping” websites, and on Wikipedia itself. And now, with Bain’s death, it’s international tabloid news.

Between the Pope Lick Monster and the famous haunted Waverly Hills sanatorium, Louisville is something of a hot spot for paranormal enthusiasts. Couch came from Wisconsin to see the bridge; Bain and her boyfriend came from Dayton, Ohio.

The rise of Instagram and selfie culture have also helped to breathe new life into the old Pope Lick Trestle dare, for both locals and tourists.

The Visit Louisville Instagram account even posted this photo a few months ago, telling potential tourists, “if you haven’t climbed on the Pope Lick Train Trestle, you haven’t lived!” In retrospect, probably not the safest message to send.

If you haven't climbed on the Pope Lick Train Trestle you haven't lived. Great shot by @stevegrider! Thanks for tagging #visitlouisville!

The most fascinating thing about the Pope Lick Monster in 2016 is that it might signal a trend of urban legends getting a second life online. There have always been local tales like the Pope Lick, or even fairly universal ones—remember Bloody Mary?—but creepypasta is a new phenomenon straight out of Internet message boards.

There’s a pile of interesting, original horror fiction emerging on Reddit and 4chan, but sometimes the audience can take things too far. Climbing a railroad trestle seems like a mild risk compared to taking lives in the name of the Internet monster Slenderman, as two tween girls allegedly attempted to do in 2014. Earlier this year, a Wisconsin judge opted to try them as adults.

It’s hard to argue that fantastic, terrible stories like the Pope Lick Monster are to blame for the dangerous choices people make, but as the distinction between “online” and “real life” continues to break down, more of these fictional horrors will find expression beyond the local high schools and 4chan boards where they were born.

After all, nothing goes viral like an urban legend.