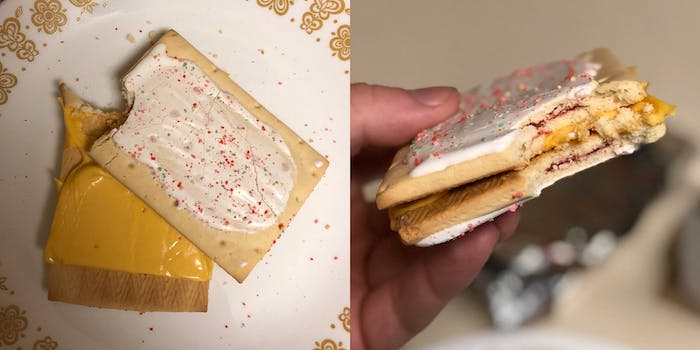 We hope nobody actually eats this.

Every American state has its culinary abominations. In Hawaii, fried SPAM is considered a delicacy. In Pennsylvania, scrapple is served at breakfast and people expect you to eat it.

Weird stuff indeed. And while you may think the food staple of Iowa is somehow corn-related, according to Iowa State University student Chris Jorgensen, it’s something much more abhorrent.

As Jorgensen noted, it doesn’t even involve real Pop-Tarts.

FAKE NEWS @FoxNews could write an article about me but FAILED to get the facts. Everyone knows I used GENERIC toaster pastries. Sad! pic.twitter.com/0sroIKDw7s

College students are known to eat the worst things in the face of poor dining hall options and abject hangriness, but that? THAT?

You could save some time and just throw it in the toilet.

Mercifully, many Iowans said it wasn’t something they actually eat.

This mans does not speak for us

It was enough to attract the attention of the Iowa State campus police, who publicly called for Jorgensen’s arrest.

As horrific as the concoction looks, it’s actually not that out of the realm of normalcy. If you’ve never had a slice of sharp cheddar cheese melted on top of a slice of apple pie, you are missing what might be the height of perfectly melded flavors: sweet, salty, savory, sugary—it’s all there in every bite. Jorgensen’s bastardization didn’t come quite as close. But it’s still good.

In the end, though, Jorgensen admitted it was mostly just a prank.

“I thought: ‘What could be the grossest thing I could put between two Pop-Tarts?'” Jorgensen told the Des Moines Register. “So I went to the fridge and got a cheese slice.”

The one bite that I did take was a solid 7/10. Not much cheese in the bite.