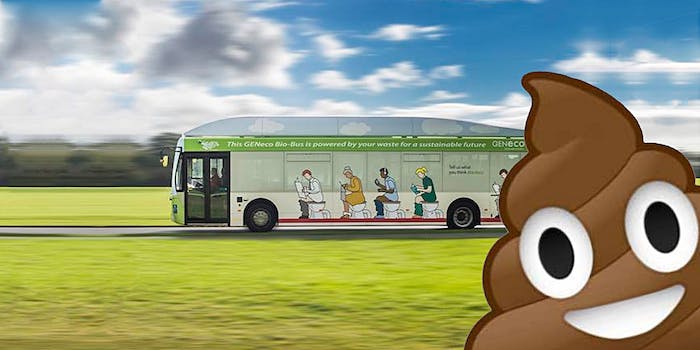 The puns, the endless puns~

We’re officially living in the future: Yesterday, the U.K. debuted a bus that is fuelled entirely by human feces and food waste.

The vehicle runs on biomethane gas—produced via the treatment of sewage, the BBC reports—and can manage a hearty 186 miles on one tank.

A big thank you to @ScaniaUK @BathOpenTop @OfficialBRS for helping us create the UK's first poo powered bus #BioBus pic.twitter.com/81dXX91Ppz

The 40-seater excrement-fueled automobile is doubly environmentally friendly: Not only does one person’s annual waste provide sufficient biomethane for 37 miles (a full tank is the equivalent of 5 people’s annual deposits), but it also emits around 30% less carbon dioxide compared to an equivalent diesel engine.

There’s just the one “Bio-Bus” for now, and is tasked with shuttling up to 10,000 passengers a month from Bristol Airport to Bath city centre.