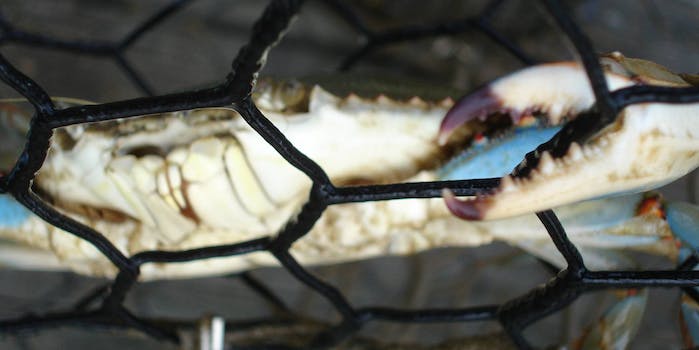 Florida crabs are being defaced with vulgar political messages

The crustacean nation is none too pleased with Clinton.

Red State and Federalist contributor Brandon Morse “found” a surprising political bent to the crustaceans he was after when he went crabbing last week in Tampa Bay. One of the crabs he caught had been Sharpie’d on its underside. Its message? Not very kind!

Someone has been painting political messages on crabs in Tampa Bay. pic.twitter.com/ovtFT6k9zC

Though the region is across the country from both party conventions as well as the goings-on of D.C., it appears to have a lively crustacean population that’s as glued to the election cycle as we humans. And it’s simply confounded this crab hunter.

Morse side-stepped talking with a reporter from the Tampa Bay Times in favor of lettings crab advocates speak for the anti-Hillary Clinton creature, retweeting statements in an attempt to gain insight into this underserved undersea demographic.

Responses ranged from hungry to woke.

@TheChiefLunatic "How can you be so politically aware and yet also be so delicious?"

Ever stop to think maybe that crab paid for that tattoo? Stop twisting these things to fit your narrative https://t.co/n9BUNkVNB8

This goes deeper than we think. Unless Morse was just gunning for that Florida Man tweet anyone who sets foot in the Sunshine State is secretly after.

Perhaps the biggest issue of a man defacing a crab only to throw it back for someone else to find is the waste of a good meal. If this is the start of some type of crab uprising, then let’s get that water boiling and really make a difference this election season.