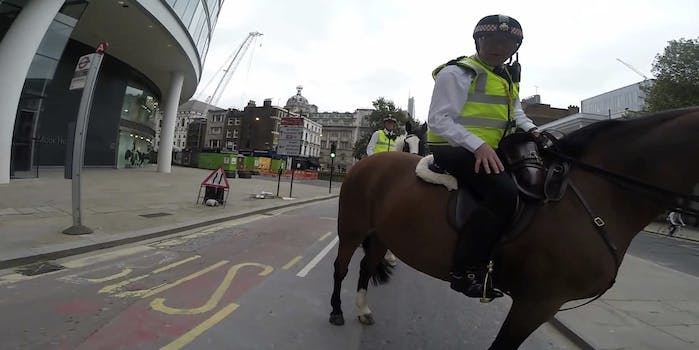 British cop on horseback puts reckless biker in his place

Speeding in a city center? That's a big nay-neigh.

If you’ve ever looked at a urban police officer on horseback and wondered just how effective they are when it comes to keeping order, this dash cam video should clear things right up.

After gunning his motor to pull a wheelie in London’s downtown financial district, a biker finds his path impeded by equestrian law enforcement. Where an American officer would have yelled at him to turn the camera off, the bobby advises him to keep recording: “Then you can show your friends about the big telling off you got from the policeman on the horse,” he says. In the end, the daredevil escapes with a warning and an order to stay out of the area.

There you have it: Cops on horses are actually effective. Wish we could say the same for cops on recumbent bikes.