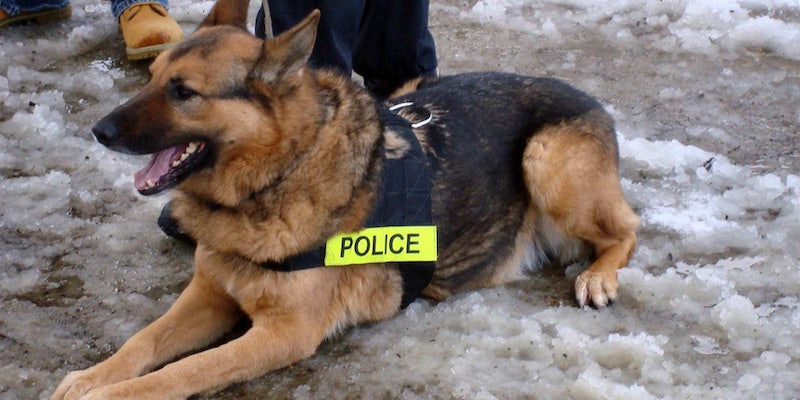 Police dogs can now sniff out your hidden computer equipment

Now, if someone can just train a dog to smell for Bitcoin.

Law enforcement agencies around the world have used to dogs to sniff out hidden contraband for generations. The highly evolved noses of man’s best friend can pinpoint everything from drugs tucked away in the trunk of a car to the traces of accelerants that can instantly turn a routine fire into a full-blown arson investigation.

However, in recent weeks, authorities have used dogs to do something decidedly 21st Century—locate hard drives filled with illicit child pornography.

According to a report in the Providence Journal, a police dog named Thoreau was recently used by law enforcement officials in Rhode Island to locate a thumb drive loaded with images of child sexual abuse stashed inside a tin box that was tucked away inside a metal filing cabinet. A Rhode Island State Police spokesperson says this incident was the first time a canine-assisted search for computer equipment lead to an arrest warrant in the state.

While Thoreau’s talents were being utilized by police in Rhode Island, the dog was actually trained in a 22-week program by across the state line, in Connecticut.

Connecticut State Police spokesperson Lieutenant J. Paul Vance said the program, which teaches police dogs to locate computer equipment, is likely the first of its kind in the county—and definitely the first in New England.

The agency first started training dogs to detect a few years ago at the bequest of the Computer Crimes Investigative Unit, Vance explained, which largely works on cases relating to child pornography and online sexual predators.

‟We have a very active computer crimes investigative unit. The unit is extremely busy and gets busier as time marches on,” Vance said.

The dogs aren’t able to sniff for specific files installed on a given hard drive and computer hard drives are omnipresent in today’s society—for example, inside of every cell phone on the market. As such, the use of dogs for this specific purpose is likely limited to situations where authorities already have a pretty good idea that a given suspect is in possession of very specific contraband files or digital information—at least relative to dogs that smell for items like cocaine or heroine.

There are about 65 dogs in the state’s overall program and many of them are trained to sniff for multiple items—from bombs, to cadavers, to hard drives. Dogs trained in the Connecticut program have reportedly been shipped around the country and law enforcement officials from as far away as Europe have come to learn about the agency’s canine training program.

This program is not, however, the first time that dogs have been used to smell for electronic equipment.

In 2006, the Motion Picture Association of America (MPAA) trained a pair of black Labradors to sniff out CDs and DVD in an effort to stop counterfeit discs from being smuggled into the United States. While the MPAA largely used the dogs as a mascots for a youth education campaign aimed at teaching middle school kids the importance of respecting the intellectual property rights of multi-billion dollar entertainment conglomerates, the dogs were effective enough for a Malaysian pirate group to allegedly put a bounty on the animals’ heads.