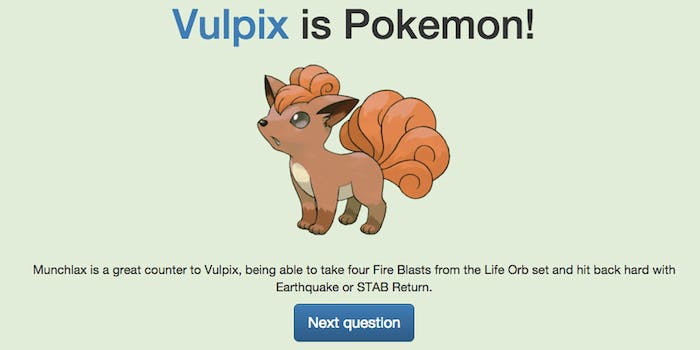 This ‘Pokémon or Big Data’ quiz will leave you stumped

You'll probably get Vulpix but the rest are pretty difficult.

It’s the ultimate test of developer knowledge and/or Pokémon loyalty: Is It a Pokémon or Big Data?

This project from pixelastic and inspired by a similar Google Doc is exactly what it sounds like, but harder than probably anticipated by most. The premise is simple: There’s a word in bold letters, and you have to decide if it’s big data or a Pokémon. But many of these big names sure sound like Pokémon names and the quiz even points that out. For example, when the answer for Hekaton pops up, the description also notes, “Not to be confused with Magneton, the levitating Pokémon.”

Furthermore, some of these Pocket Monsters are far from the ones that Ash carried into battle against the likes of Team Rocket. Many of the Pokémon in the quiz are from later generations, such as Gorebyss which doesn’t show up until the Ruby and Sapphire versions of the famed video game.

Good luck with the quiz—unfortunately you won’t have Professor Oak around to help you out.

Screenshot via Pokémon or Big Data