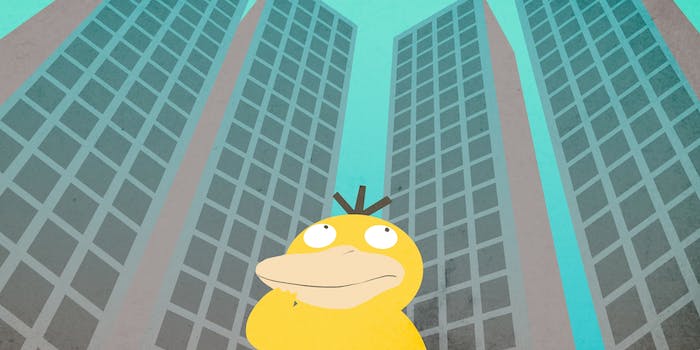 Hear the struggle of an artist Weedle living in Williamsburg.

New York City—home to Times Square, the Statue of Liberty, and thousands of Pokémon trying to find their way in the city that never sleeps. And now there’s finally a photographer daring enough to capture all those journeys.

People have been mega-obsessed with Humans of New York, a project to tell the story of the millions of people of the grand metropolis. But often we focus too much on the trainers and not the actual Pokémon that are living in the city’s five boroughs.

Thankfully, photographer David Wardell has been inspired by the recent launch of Pokémon Go to talk to these pocket monsters and hear what they have to say. With Pokémon of New York, we get a peek at these lives instead of just trying to put them into Pokéballs.

Daily Dot: David, thanks so much for talking with us! Let’s go ahead and start with the basics. What region are you from and where do you live now? How old are you and what do you do for a living?

I’m a 26-year-old photographer from the Kanto region, just recently moved to Harlem. It’s been a big shift for me! We’ve got some big cities in Kanto, but nothing like New York. It’s hard to get a permanent job in photography, so I’ve been freelancing here and there.

Did you ever try being a Pokémon trainer? If so, how far did you get? If you haven’t, why not?

Oof. Not really my wheelhouse. I’m an artist, not a fighter. My grandpa tried teaching me how to catch a Weedle, but I just couldn’t get the hang of it!

So what inspired you to make the Pokémon of New York page?

This city is full of untold stories from the most unlikely sources. I created Pokémon of New York in an attempt to raise awareness that life in this city can be rough for Pokémon trying to make it on their own. They’ve got dreams, they have families, and above all, they have heart!

How do you feel about Todd Snap, famous Pokémon photographer best known from Pokémon Snap?

Todd Snap is a personal hero of mine. He’s a pioneer in the Pokémon photography field, everything I learned I learned from watching him.  I’ve been making my own ZERO-ONE photography vehicle, but right now it’s just a go-kart filled with extra SD cards.

What about Brandon Stanton?

The creator of Humans of New York.

Humans of New York? I’m sorry, I don’t mean to be disrespectful, but what’s the point? Humans are everywhere! Sounds similar to what I’m doing, he better not be doing some silly parody of my work.

How has been meeting these Pokémon in New York City been so far?  What’s been the most surprising? Are they different from Pokémon that you’d come across in Viridian City or Celadon City?

Well for starters, they can talk. And not like “Pika Pika,” talk, like “explaining to me how they got fired last week” talk. Not sure if prolonged exposure to humans caused them to learn, but it definitely helps when giving them directions for a shoot.

As a whole, they seem less interested with battling and being the very best. They’re more concerned about survival and leaving this world a better place for their PokéEggs.

Who has been your favorite Pokémon to photograph so far?

I once photographed Zapdos.

Why are you looking at me like that? It totally happened. I just lost my hard drive with the photo on it.

Could we maybe see it?

What?? People lose hard drives all the time!

Haha, I guess. Especially with Team Rocket always trying to get intel on legendary Pokémon. Anyway, how do you feel about the response to your page so far?

I’m overwhelmed! Absolutely ecstatic to see so many people interested in hearing about life in New York City from a different perspective. I’ve been churning out photos as fast as I can take them, it’s really exciting to see all the love the page has been getting.

Do you have any Pokémon that help you with the photo series?

Just Frank, my Voltorb assistant. He provides the Flash.

Anything else I should have asked about or that you want to touch on?

Hmm… I like shorts?  They’re comfy and easy to wear. Oh, and go Team Instinct!

Gotta snap ’em all. You can check out the rest of David’s project at his Pokémon of New York Facebook page or Tumblr.