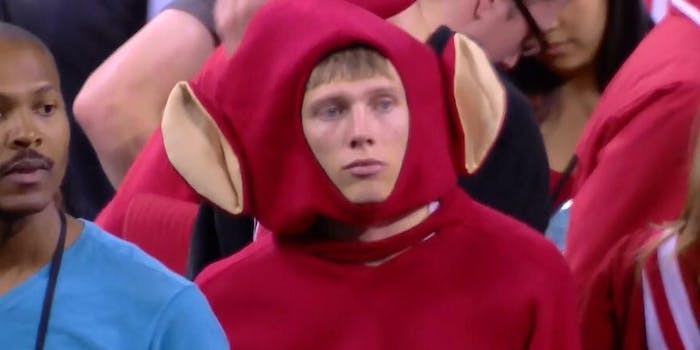 How one Wisconsin fan came to personify America's mood.

The Duke Bluedevils won Coach Mike Krzyzewski his fifth NCAA men’s basketball title Monday night with a breakneck finish against the Wisconsin Badgers. It’s no secret that Americans were rooting for the Badgers—Duke is a dominant power tethered to an elite private school that is good at lacrosse.

Nevermind that Coach K is an innovative genius that’s evolved with the times and won a gold medal in his spare time. It’s OK to revere Coach K and simultaneously detest Duke. The program spawned that golf polo monster Christian Laettner, after all, and on Monday rode that pimply faced Ted Cruz lookalike Grayson Allen and his 16 big points—including a run where he scored eight straight for the Blue Devils—to the ‘ship.

Americans love to turn to poignant symbolism during trying times. Luckily, we didn’t have to look very far Monday night.

The Wisconsin fan, dressed as the red Teletubby, Po, is now Internet folklore. A status symbol applicable to any situation, and a barometer for how we all feel right now.

When your content doesn't resonate with your target audience pic.twitter.com/Hw9grI9fug

Just remember…this guy has to walk back to the car in a telletubbies costume pic.twitter.com/3RehCuszS6