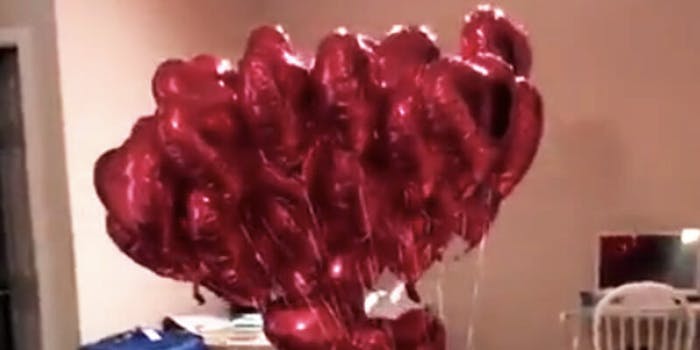 Every now and then we can use a reminder that the world isn’t all doom and gloom, despite an oppressing 24/7 news cycle and the overwhelming cesspool of the internet. Sometimes, we just need a dog carrying a bunch of balloons.

And that’s just what Twitter user @gamezjakee gave us earlier this week, in the form of his little wiener dog named Ellie presenting a large bunch of heart-shaped balloons. “If someone could caption this that would be great,” he tweeted along with the video.

In the short clip, Ellie adorably toddles around the corner of the couch for the surprise reveal of her being strapped to the impossibly large bunch of balloons—tiny stature notwithstanding.

Suffice to say, Jake’s tweet went viral and his video of Ellie was viewed over seven million times in less than three days. And caption it, people did!

When your package is small but your heart is big https://t.co/OVKrRSxOzO

The meme very much falls under the classification of a “wholesome meme,” which a subreddit defined as “a meme that promotes health or well-being of body, mind, and/or soul,” or one that is “pure of heart, devoid of corruption or malice, modest, stable, virtuous, and all-around sweet and compassionate.”

If nothing else, Ellie and her balloons are certainly pure of heart and devoid of corruption, so it should come as little surprise that many people had the same “love and affection” joke to make—a phrase that is typically popular when it comes to wholesome memes.

Me carrying all my love and affection waiting for the right person https://t.co/cgzAjtVOPd

Me looking for someone to catch this love and affection https://t.co/JGmtfmBsLc

Me pulling up to my boo’s house with all this love and affection https://t.co/MR89bDlimz

As far as Jake goes, he’s trying to milk this 15 minutes of fame for all its worth, with a plea to get onto the Ellen show with Ellie.

A thirsty request? Eh, perhaps. But hey, it’s the least the universe could do it for someone who brought a moment of fleeting joy into our lives. Nor would it be the dumbest internet sensation ever to be featured on Ellen, so we say let him have it.