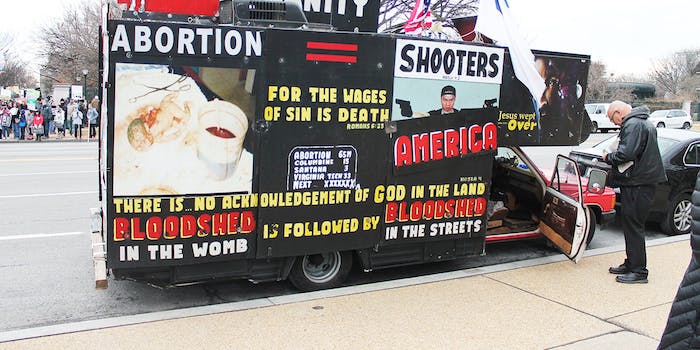 Planned Parenthood and the dangerous rhetoric of hate

Words can be a powerful tool to spread hatred and violence.

Violence against abortion providers is not new, but the shooting that took place at a Planned Parenthood in Colorado Springs on Friday reminded us of the hatred that fuels the kind of reaction we saw from many pro-lifers.

We still don’t know enough about the shooter, Robert Lewis Dear, and his motives, but sources say that he told investigators “No more baby parts” after his arrest and “expressed anti-abortion and anti-government views.” Of course, it’s possible that he just happens to hold those views (as do many in the United States) and the shooting was motivated by something else entirely.

Whatever reason Dear decided to carry out this senseless act of violence, some pro-lifers were quick to cheer him on:

If you kill the unborn what right do you have to expect your own life be spared? I hope the cops R OK https://t.co/5S5XwjmNV1

As a writer, of course, I have to be cautious and not make claims that the evidence doesn’t quite (yet) support. But as a progressive, as a woman, as a human being, I feel compelled to connect the shooting with the increasingly violent anti-choice rhetoric online that’s especially pervasive among the Christian Right. Although it’s difficult to draw conclusions about causation from data that only shows correlation, I’m not alone in making that connection.

I’m usually skeptical of “look at these random people saying things on Twitter” as evidence of anything, but it’s downright chilling to see so many people celebrating murder in the name of life. Seeing that, I’m not exactly surprised that one of them finally made good on the threats.

Previous spikes in violence against abortion providers may have been caused by the hateful incitement of groups like Operation Rescue, as Sarah Kliff points out at Vox. More recently, too, the FBI reports that the “blatantly manipulated” videos claiming that Planned Parenthood sells fetus parts have been associated with an rise in violence against abortion providers.

In fact, just weeks before the Colorado shooting, the FBI issued a warning about increased attacks against clinics.

Some pro-lifers, however, have spoken out against the shooting. Many of them reiterate that it’s important not to “jump to conclusions” and that we still don’t know “what connection” Planned Parenthood has to the shooting, even though the shooting occurred at Planned Parenthood. This defensiveness is understandable given the horror of what’s just happened and the pro-life supporters’ fears that they’ll be lumped in with the shooter. Still, it dismisses all too readily the very real connections between rhetoric and action.

As Tarico points out, anti-abortion pundits and activists have been demonizing abortion providers and their patients this way for decades. As a result, many pro-lifers—even those who would never, and will never, actually commit an act of violence themselves—start to see anyone who supports access to abortion as inhuman and evil. Anyone who has ever volunteered as an abortion clinic escort has seen these beliefs in practice.

Dehumanizing someone does not mean that you’re going to try to murder them. If it did, there’d be even more murder in this country than there already is. But for a minority of people, that’s exactly what it means. For those people, it’s possible to get to point where you see someone as so vile, so reprehensible, so not human that it’s okay to kill them if that would serve your goals. Or to encourage violence against them.

Of course they didn’t literally cause him to shoot those people, and they may genuinely not realize that their rhetoric contributes in any way to violence against abortion providers. But everything we know about the way that ideology and dehumanization work suggests that pro-life rhetoric, especially the pro-life rhetoric that’s full of hatred and violent imagery, is playing a role in this tragedy, too.

That is the conversation that too few on either side are willing to have. Some progressives have responded to the attack by reminding others that Planned Parenthood doesn’t just provide abortions, but other important medical services, too. But the problem isn’t just that pro-lifers hate abortion. It’s that many of them also hate anyone who supports it, and they especially hate anyone who provides it or accesses it.

When well-meaning liberals and moderates repeat tired lines about how “both sides have valid points” when it comes to the abortion debate, they ignore the fact that only one side is consistently pushing violent, dehumanizing rhetoric about the other. If there have been any pro-choice terrorists, I’ve yet to hear about them.

Where do we go from here?

First of all, Dear’s exact motives must be determined (I’m sure none of us will be surprised), and he must face justice. But looking further forward, it’s clear that the pro-life movement—including the current Republican presidential contenders, who have said so little about this shooting—needs to take a long and sobering look inward. Sure, calling your opponents baby-killing murderers is great for firing up your political base, but it also incites some of its members to murder people. That’s a pretty significant negative side effect.

Too many lives have already been lost in the war over abortion, and it’s not the lives pro-lifers think it is.

Miri Mogilevsky recently received a Masters in Social Work from Columbia University and now works as a counselor in Columbus, Ohio. She loves reading, writing and learning about psychology, social justice and sexuality. Miri writes a blog called Brute Reason, rants on Tumblr and occasionally even tweets @sondosia.