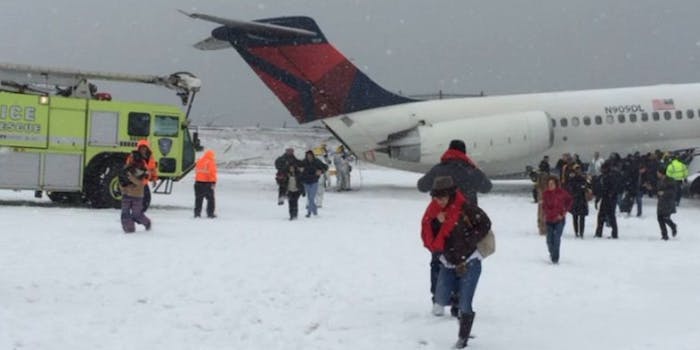 The airport is closed until 7pm.

A Delta Airlines plane attempting a landing at snow-covered LaGuardia Airport crashed into a fence and slid off the runway Thursday morning.

a plane just slid off the runway at LaGuardia Airport… pic.twitter.com/LRoUHcWTsh

Look at this shit! Knew I shoulda stayed my ass at home

Although there have been no reports of serious injuries, photographs taken from the other side of the crashed plane indicate just how close Delta 1086 came to a much more disastrous fate.

Bad enough for the passengers on the @Delta flight at #LGA today, but how scary it must have been for the pilots!: pic.twitter.com/idIYTdMu2S

Even passengers not onboard who were hoping for a smooth day of travel are out of luck, as LaGuardia will be closed for most of the day.