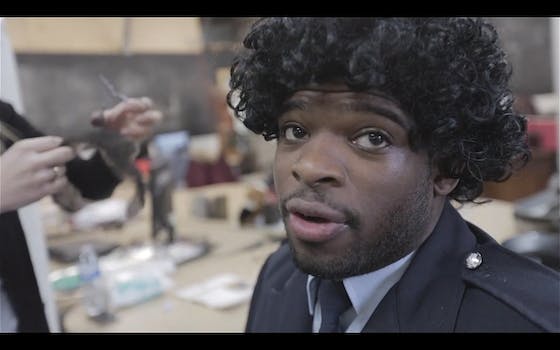 This is our kind of holiday surprise.

Acts of kindness from popular athletes never get old, no matter how silly they are.

Case in point: Montreal Canadiens defenseman P.K. Subban took a page out of Kyrie Irving’s playbook and dressed up as an old man (actually a security guard) to take a group of kids to the Canadiens’ practice facility for a shoot-around. Just as the youngsters were dashing around the ice in their hockey swag (including a Subban sweater), the 25-year-old member of Canada’s gold medal-winning Olympic hockey team pulled a Superman and revealed his true identity.

Subban skated with the kids, dazzling them by dropping his stick, and showed off his puck-handling prowess on skates. After the once-in-a-lifetime holiday surprise, the starry-eyed visitors were showered with gifts in the Canadiens locker room. Subban’s sister Natasha helped guide the future hockey stars through their memorable day.

There’s a lot more to the story than just an athlete reaching out to make the day—if not year—of a group of Montreal-area sports fans.

Scott Colby of the Toronto Star revealed that Subban was carrying on a tradition set by his father Karl, an educator and community leader whose work with underprivileged youth in Toronto has been well documented. Karl Subban, a father of five, is an ambassador for Hyundai Hockey Helpers, which offers young people grants to let them live out their hockey dreams.

Subban’s brothers Malcolm (goalie) and Jordan (defenseman) have been drafted by the Boston Bruins and Canadiens, but he has given them a lot to live up to—last year, he won the James Norris Trophy for the top defenseman in the NHL.