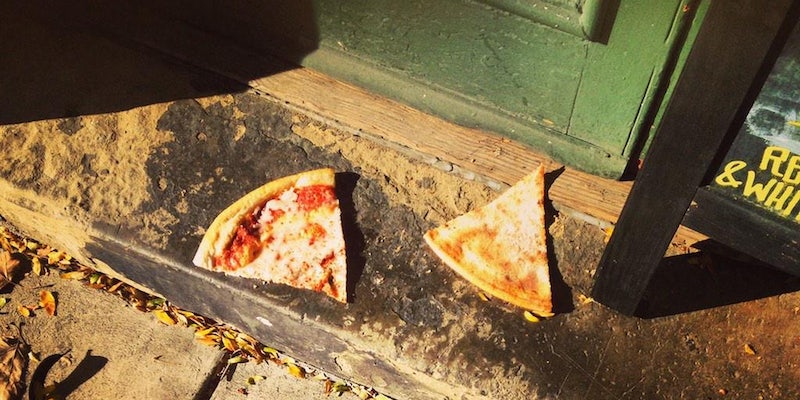 Behind Karl Spaeth's quest to bring justice to those who cannot bring it to themselves.

It’s 1:30am ET in the Indianapolis bus terminal (and probably the rest of Indianapolis, but I’ve been on the bus too long to think very straight). I’m on the last leg of my journey home. I’m hungry.

“No,” I tell myself. “You just bought groceries, you’re almost home, you can make it.”

So instead I start scrolling through Twitter, trying to kill time. And there it is. A friend retweeted a picture of four, untouched slices of pizza just lying on the sidewalk. They’d been discarded, uneaten, and unloved. I wanted to reach through the screen and give them a good home.

“What kind of monster would do this?” I thought.

The post originated from the Twitter account @PizzaCrimes. I’d never heard of it before but I immediately knew that the person behind it was exposing an ugly truth that Americans would prefer remain hidden.

The man in question turned out to be Karl Spaeth of Cincinnati. He agreed to meet with me. What he had to say wasn’t pretty, but it’s something you need to hear. I sat with Spaeth in the green room of Go Banana’s Comedy Club in Cincinnati, and he served me up a different kind of dish—the dish of wisdom. The following is an edited transcript that is not for the faint of heart.

The vast majority of pizza crimes in this nation go ignored. It’s not something we’re hearing about from the major news outlets. Why do you think this is something we’re turning our backs on as a society?

I don’t know if we’re necessarily turning our backs on it, but I do think that it’s marginalized because it is a fast food-style food. You know, if you saw a filet mignon on the ground people would be in a uproar about it, but because it’s a lower-class food I think people don’t care. People like me care, but I’m a social crusader.

So is that kind of why you started this?

When you see as much pizza on the ground as I have in my life, you realize people need to see this… Maybe they’re just not thinking about it.

And do you remember there being a catalyst? Like at one point you saw a specific piece of pizza? Was there a breaking point where you saw something and said “You know what? This is enough?”

It was a full slice, cheese up.

Full slice, cheese up. So technically probably still OK to eat. In Bloomington.

And do you feel like that is a particularly bad place for this kind of thing?

That was the only one I saw so it might have been an isolated incident. In Cincinnati it’s an epidemic.

Once you noticed it, did you start noticing it more?

Yeah it’s that kind of thing.

And do you feel like this is making a difference?

I would like to think it is, because I haven’t seen one in like a month in Cincinnati and I live on a street that has three different pizza places.

You haven’t seen a single slice?

I haven’t seen a single slice on the ground. Maybe some crust, but no full slice cheese up. No multiples. But then somebody did text me a picture of half a pizza in a garbage can.

That must have been hard to look at.

That was brutal, yeah. That was a massacre.

That brings up another topic I wanted to address. You see stuff like that and you can’t unsee it. How do you deal with the emotional toll this must take on you?

Well, as a pizza lover, it ahh, [Spaeth becomes visibly shaken] I mean I really cherish every slice, you know? So it’s a pretty big toll actually. I find myself eating more pizza, like to completion. I don’t leave any half slices, I don’t leave any crust, I just finish it… even if I’m not hungry. I’m not saying I’m better than other people but…

People always seem to love pizza when it’s hot and fresh, but it’s often tossed aside when it cools down. Do you find the victims of most of these crimes to be older pizzas?

No. I would say they are all… well… they aren’t fresh when I find them because I find them the next day, but it’s always like, I would say they all probably occur between three and five in the morning, when people get pizza from a pizza window, and they start eating it, and then their Uber gets there and they just chuck it on the ground.

So Ubers are involved?

I do think Uber, maybe because they don’t do background checks on their drivers, do have a part to play in it. Taxi drivers as well. Which is weird, that they would team up like that. 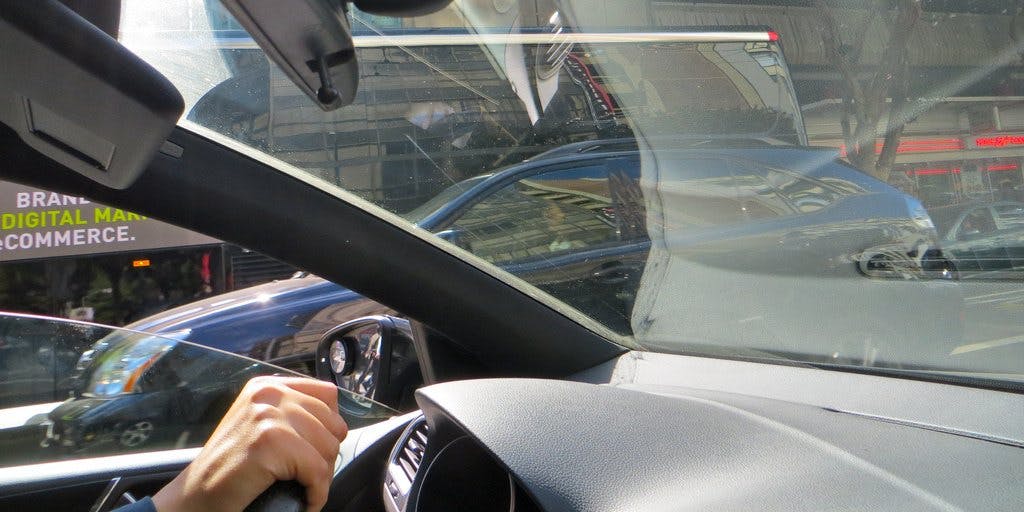 So you’re saying they’re not so much causing it as allowing it to happen? Like they’re seeing it but not stopping it?

They’re witnessing it, and I think if they would let people eat in their cars you would see the number of pizza crimes cut down significantly.

Let’s say I’m walking down the street, and I see a guy and he has two slices of pizza. He’s about to get in his friend’s car, I see him go to throw them away. What should I do? Is it dangerous to get involved? Is it OK to just ask, “Hey can I have that?”

I think that would be OK: to be like “hey are you just going to throw those away?” and if they’re like “yeah my friend doesn’t let me eat in his car” then you can be like “oh can I have that then?”

Don’t waste that pizza. Don’t commit a crime. I think that would be a noble thing to do.

Let me ask you this, some of the images you’re posting to Twitter are pretty graphic. Some people have said you’re being gratuitous or just trying to be shocking. How to respond to that kind of criticism?

I think that people just aren’t used to honest journalism anymore, and I don’t think anybody ever said that about the Weegee crime photos of the ’50s. I just think it’s honest journalism is what it boils down to. Yeah it’s graphic, and yeah it might make people sick, but you know what makes me sick? The fact that people are doing this in the first place. Sorry I’m not CNN and sugarcoating everything for you.

You yourself are not a pizza—

—but you’ve taken up their cause. What’s the personal connection you feel?

What do you hope to accomplish with PizzaCrimes?

Have you ever flipped open a lid to check, or is that just too scary?

It’s a little scary.  Mostly because I don’t like mice.