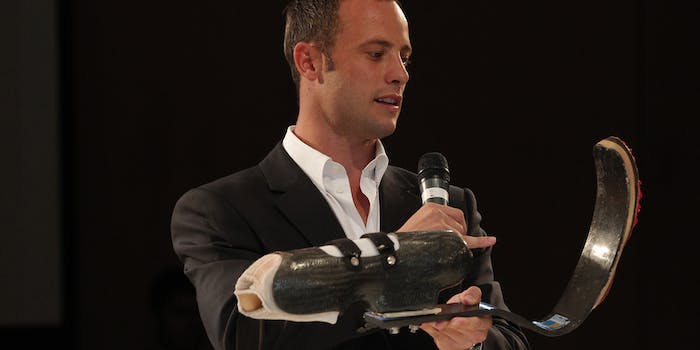 Dragging a case out of the courtroom, one update at a time.

Next month, the South African runner Oscar Pistorius will stand trial for the 2013 killing of his girlfriend, Reeva Steenkamp. But judging from its social media strategy, his public relations team aims to control the narrative before the proceedings even start.

The defensive Twitter account @OscarHardTruth, which promises “factual updates,” popped up yesterday, and is probably too hard a sell:

“Innocent until Proven Guilty” sounds nice, it’s just that “Truth Shall Prevail“ sounds a little more like they’re going to weave an X-Files-worthy conspiracy theory to explain Pistorius’s innocence. (The Paralympian, whose legs are amputated below the knee, claims he meant to shoot a perceived home intruder, and part of the case hinges upon whether he was wearing his prosthetics at the time.)

As the trial approaches, many untruths half truths and versions of the truth have, and shall be spread across the world.

This feed will provide the hard truth as it unfolds and provide information that will become clearer during the trial.

We WILL address the truth and expose those with ulterior motives. The Truth will Prevail.

This platform will share info i.a. alerts to possible briefings/statements, links to key media coverage and clarification when necessary

It remains to be seen how the quickly swelling ranks of followers will engage with this sort of unapologetic spin, especially considering the operators won’t respond to individual tweets. Trolls should feel free to bombard [email protected], however. Not the catchiest slogan, we know, but imoscar.com was already taken.