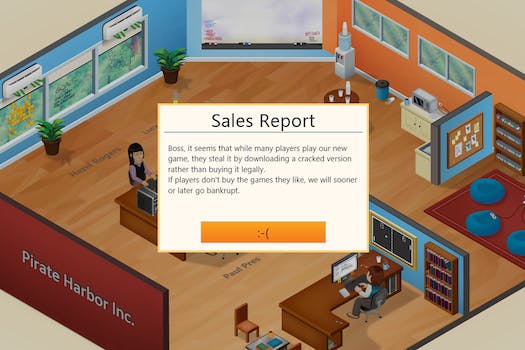 How one game company showed pirates the error of their ways.

When we released our very first game, Game Dev Tycoon (for Mac, Windows and Linux) yesterday, we did something unusual and as far as I know unique. We released a cracked version of the game ourselves, minutes after opening our Store.

I uploaded the torrent to the number one torrent sharing site, gave it a description imitating the scene and asked a few friends to help seed it. 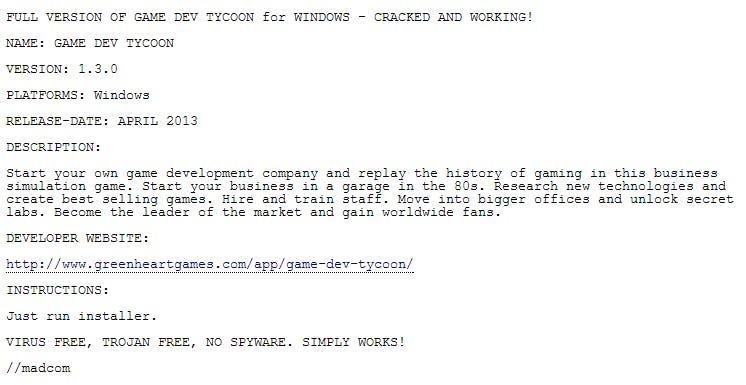 A minute after we uploaded it, my torrent client looked like this: 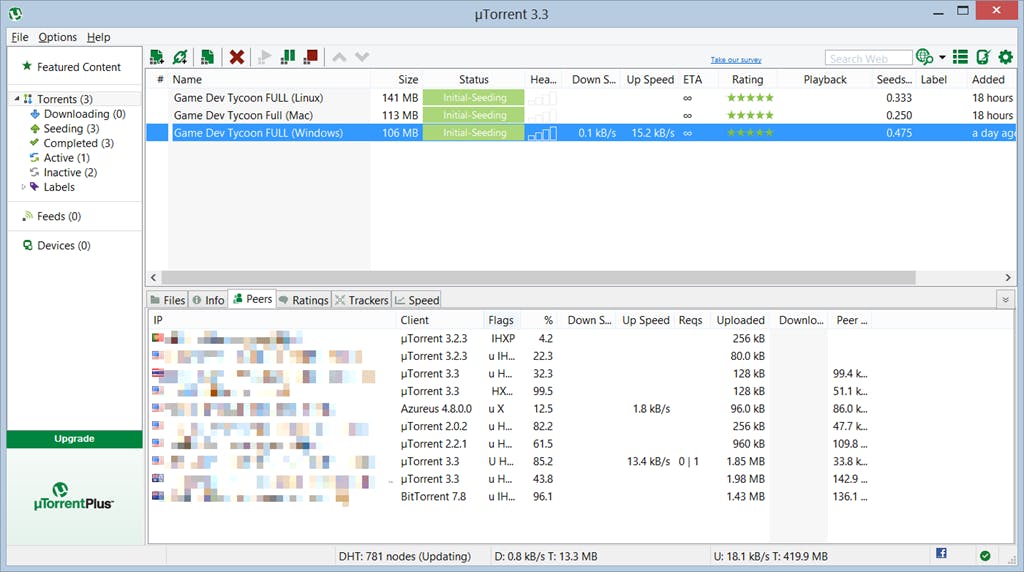 Soon my upload speed was maxed out (and as of the time of writing still is) and my friends and I had connections from all over the world and for all three platforms!

How does piracy feel?

The cracked version is nearly identical to the real thing except for one detail… Initially we thought about telling them their copy is an illegal copy, but instead we didn’t want to pass up the unique opportunity of holding a mirror in front of them and showing them what piracy can do to game developers. So, as players spend a few hours playing and growing their own game dev company, they will start to see the following message, styled like any other in-game message: 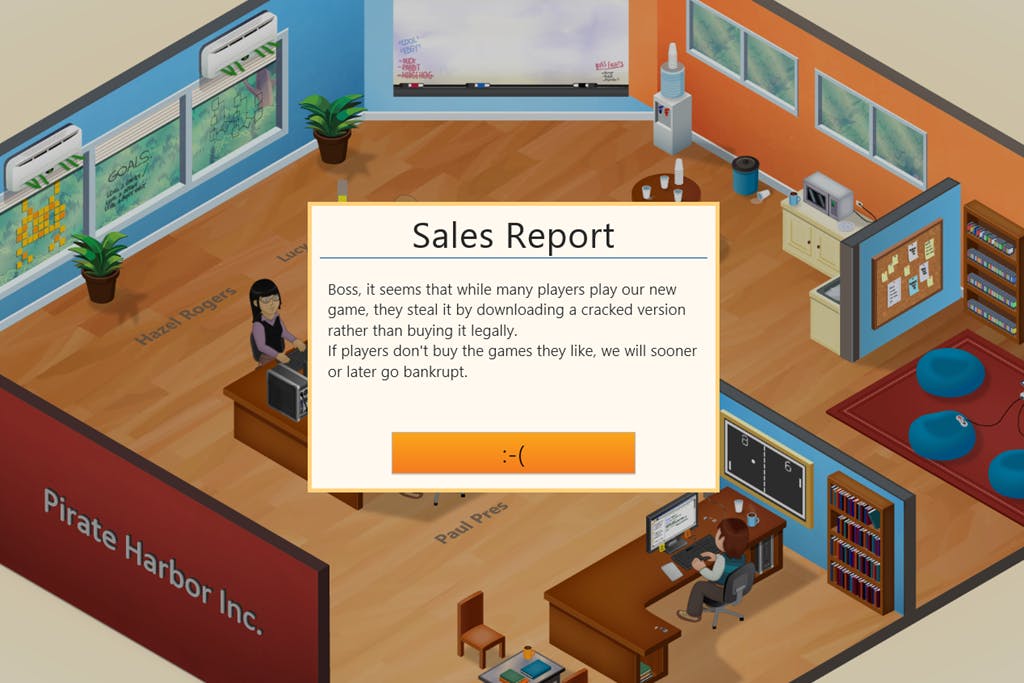 Boss, it seems that while many players play our new game, they steal it by downloading a cracked version rather than buying it legally.
If players don’t buy the games they like, we will sooner or later go bankrupt.


Slowly their in-game funds dwindle, and new games they create have a high chance to be pirated until their virtual game development company goes bankrupt.

Some of the responses I found online (identities obscured to protect the guilty): 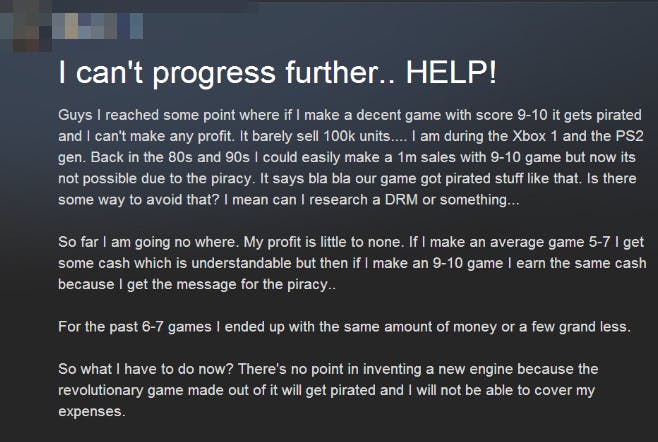 Is there some way to avoid that? I mean can I research DRM or something …

Why are there so many people that pirate? It ruins me!


As a gamer I laughed out loud: the IRONY!!!

However, as the developer, who spent over a year creating this game and hasn’t drawn a salary yet, I wanted to cry. Surely, for most of these players, the 8 dollars wouldn’t hurt them but it makes a huge difference to our future!

Trying to appeal to pirates

I know that some people just don’t even think about buying games. They will immediately search for a cracked version. For this reason, when we released the game, we also published a page which targets people who search for a cracked/illegal version. Unfortunately, due to my lack in search-engine-optimization skills, that page has had no impact yet, but I hope it will convince some to buy the game in the future.

[…]if years down the track you wonder why there are no games like these anymore and all you get to play is pay-to-play and social games designed to suck money out of your pockets then the reason will stare back at you in the mirror.

I do think it’s important to try to communicate what piracy means to game developers to our consumers. I also tried to appeal to a particular forum a day earlier after someone who I gave early-access to the Store seemed to have passed on the copy to others:

We’re just a start-up and really need your support. The game is only 7.99USD, DRM free…


Clearly, my post hadn’t worked too well since on the same forum someone posted the earlier screenshot (“Why are there so many people that pirate? It ruins me!”) just a bit after I made my appeal and this was followed by many others complaining about piracy.

I still hope that it made a difference to someone.

Anyway, how many really did buy and how many did pirate our game during this first day?

Today, one day after release, our usage stats look like this: 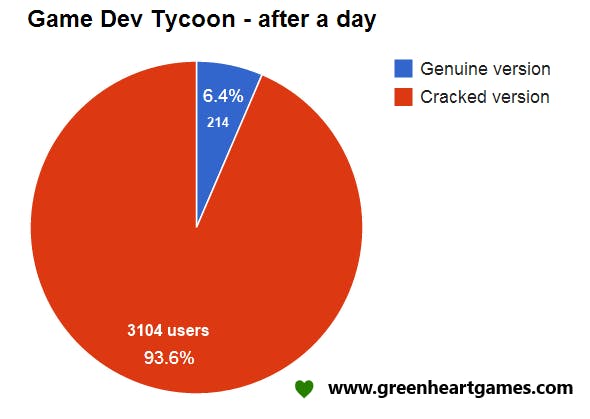 Over 93.6% of players stole the game. We know this because our game contains some code to send anonymous-usage data to our server. Nothing unusual or harmful. Heaps of games/apps do this and we use it to better understand how the game is played. It’s absolutely anonymous and you are covered by our privacy policy. Anyway, the cracked version has a separate ID so I can separate the data. I’m sure some of the players have firewalls and some will play offline therefore the actual number of players for the cracked version is likely much higher.

To the players who played the cracked version!

I’m not mad at you. When I was younger, downloading illegal copies was practically normal but this was mostly because global game distribution was in its infancy. To be fair, there are still individuals who either can’t make a legal purchase because of payment-issues or who genuinely cannot afford the game. I don’t have a quarrel with you. To the rest who could afford the game consider this:

We are not wealthy and it’s unlikely that we will be any time soon, so stop pretending like we don’t need your 8 dollars! We are just two guys working our butts off, trying to start our own game studio to create games which are fun to play.

The game is DRM free, you can use it on up to three of your computers for your own use, you get copies for Mac, Windows and Linux, you can continue your game before piracy wrecked your company and we even aim to provide you with a free Steam key once the game is on Steam. All for a mere 8 bucks.

If you just want to try the game then there’s the free DEMO:

Do we need DRM?

Whether or not to use DRM isn’t clear at all to a new start-up. The main argument against it is that all it does is to inconvenience genuine customers. Fact is that any game can be cracked, so all you do is spend time on something that in the end just annoys your real customers while only slightly delaying the inevitable. The only way to protect yourself is to create an online game. I guess that’s why so many studios focus on these types of games and it’s probably a driving force to eradicate traditional single player games.

Personally, I love single players games and hope to be able to continue down this path and if more people would buy our game, we might even be able to.

Would I do this again?

This was a unique opportunity. You need a game development simulation game to make this particular joke work. The more general idea/experiment to release a cracked version which inconveniences and counts pirates can probably work for any game and might work in the long run.

If pirates are put through more trouble than genuine customers, maybe more will buy the real game. Sadly, for AAA games it is currently the other way. Customers get the trouble with always-on requirements and intrusive DRM, while pirates can just download and enjoy. A twisted world.

To our genuine customers

Thank you for your support. Your purchase is more important to us than you might think. We hope to be able to bring you more games in the future. Also, please update to the latest version of the game by using the download link from your purchase email. Before writing this blog post I’ve fixed most of the known issues