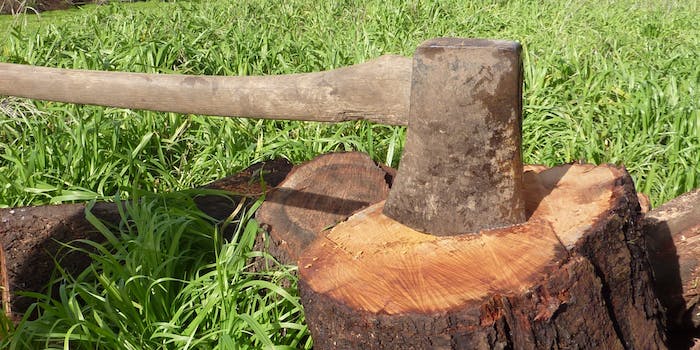 This classroom demonstration was meant to make physics more exciting for high school students. Instead, it turned into an object lesson in why you shouldn’t trust a student wielding an axe.

A video from the class shows a teacher lying on the floor with a cinderblock balanced on his chest, as a staff member swings the axe down to hit the block. He misses, and the result is not pretty.

Redditor aderspatron posted a GIF of the scene from another angle, proving that yes, you have indeed just watched a man hit another man in the balls with the blunt side of an axe.

The original video was titled “How the physics teacher lost his job,” leading many to mistakenly assume that the teacher was the one swinging the axe. But redditor maneefmubarak, who verified that he was the student in the background of the above GIF, clarified what had happened in the Reddit post’s comments:

The dude who was hit is the teacher. He was just fine – it was a graze – not a full on partitioning. The person holding the axe is a member of staff (either an assistant principal or a hall monitor) that we asked to come help with the demonstration.
The teacher walked funny for like a couple of days and then he was just fine.

The idea of swinging an axe in school is crazy no matter how you look at it, but there is a semi-reasonable explanation for this scene. The teacher wanted to demonstrate a popular physic experiment demonstrating the law of inertia. The energy of the swinging object (in this case, the axe) is absorbed by the cinderblock, which expels that energy by exploding. The person lying under the block should barely feel any impact at all, to the point that people often perform the trick using a bed of nails.

Here’s what the demonstration looks like when the person holding the axe or sledgehammer doesn’t hit the other participant in the junk.

There are a couple of lessons to be learned here. First of all, physics class can totally be exciting. Secondly, don’t lie on the floor and let someone hit you with an axe unless you’re very sure they know what they’re doing.

Correction: The teacher was the person on the ground. A staff member swung the axe.

Photo via Brittgow/Flickr (CC BY 2.0)