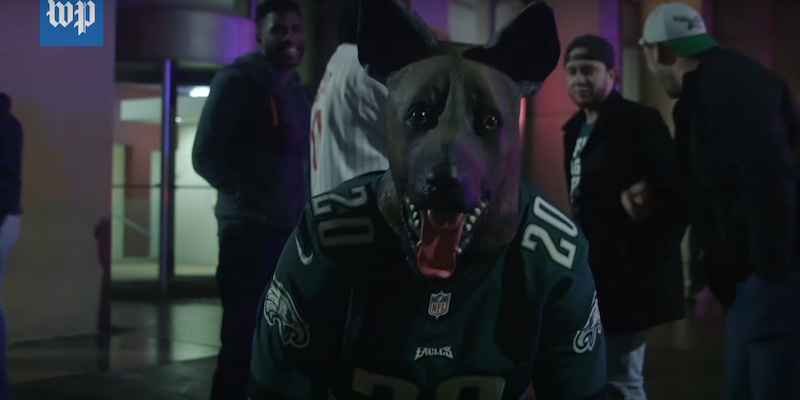 The city made it through the chaos last night, but just barely.

As everyone predicted, Philadelphia Eagles fans went nuts after their team won the Super Bowl 41-33 over the New England Patriots last night. The anarchy ranged from fun shenanigans to dangerous behavior—including looting and assault. Here are some of the highlights, and lowlights, of what went down in the City of Brotherly Love last night.

After they did backflips and stage dives from it, a group of people eventually collapsed the awning of the Ritz-Carlton.

Shit is getting wild in Philly. pic.twitter.com/F3SZge43ZM #SuperBowl

Despite police greasing up downtown light poles, people still managed to climb them… and set off fireworks.

People also climbed the gates of City Hall, which the police did not grease prior to the Super Bowl.

Fires were burning all over the place.

Seen this on snap, lmao they burning it down pic.twitter.com/rtelJNsZu7

At least one car was flipped.

#NOW @eagles fans flip a car outside the Bellevue! Come on guys! Celebrate responsibly!!! Police are guarding the car now on its side @PhillyPolice @6abc @Eagles pic.twitter.com/zDYnDwNaVk

Some fans trashed a gas station, and there were reports of looting.

People yelling “Everything is free,” looting, trashing this gas station. Damn it, Philly we better than this. pic.twitter.com/WecXaAmrFh

Someone even claimed a police horse was stolen.

So far in Philly tonight: a police horse has been stolen (one recovered), an off-duty cop has been arrested, Looting at Macy’s, countless people on light poles, Ritz Carlton awning has collapsed, and the rocky statue will likely fall by the morning. #phillypolicescanner

April Glaser, a reporter for Slate, monitored the city’s police scanner and the things she heard ranged from bizarre to terrifying:

12:11am: “On Juniper and Market traffic lights are down. All signs are down.”

11:35pm: “Do you have medics over here coming to 17th and Lombard? We have a female here who was assaulted.”

But not everything was horrible. A man tossed out some money, and people managed to not fight over it.

Some dude, in the middle of all the chaos, decided it was the right time to propose marriage.

Most Philly proposal ever: in the middle of Eagles #SuperBowl celebration chaos, while holding a 40 of Olde English pic.twitter.com/1iff7cAPr2

One police officer even seemed to be enjoying himself.

Despite all the madness, the city of Philadelphia was still standing when the sun rose on Monday. Which is great, because Philly still has a parade to put on.

Still going strong in the EOC. But, if everyone could go home that would be great. We have to get some rest to start planning a parade in the morning. pic.twitter.com/tueubQ4yHF