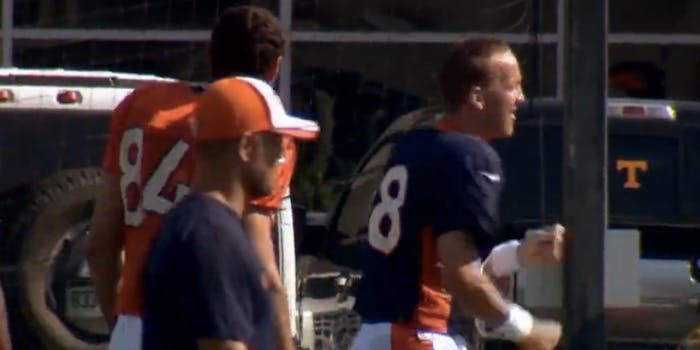 Manning, a University of Tennessee alum, comes by the song with pride.

With the same fancy footwork that has been dodging onrushing defenders for more than 15 years, Denver Broncos quarterback Peyton Manning opened a training camp stretching session by doing a bit of a jig to the ’60s bluegrass tune, “Rocky Top.”

Manning, a University of Tennessee alum, comes by the song with pride; it was the fight song for his alma mater. Manning remains the all-time leading passer in Volunteer history.

New Orleans native Peyton was the lone member of his family of legendary quarterbacks to pass on the University of Mississippi to play college football. His father, Archie, a native of Mississippi, is one of the most famous quarterbacks in Ole Miss history, perhaps only surpassed by Peyton’s younger brother, Eli. Older brother Cooper was scheduled to attend Ole Miss, but his career was cut short by spinal stenosis. Football lore has it that Peyton wanted to strike out (sorry for the mixed metaphor) on his own and wear Tennessee orange instead of Ole Miss red and blue.

While Eli is a bit of a shrinking violet, Peyton loves the spotlight. He is a popular commercial spokesman and has hosted Saturday Night Live.

Pretty sure the levity will soon end as Manning and the Broncos hope to overcome the embarrassment of Super Bowl XLVIII.

H/T and screengrab via KUSA-TV