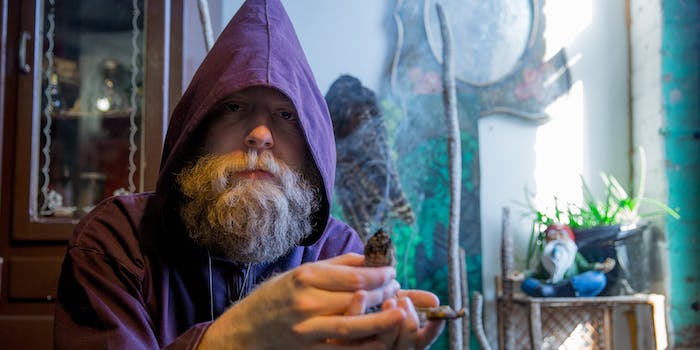 Don’t expect him to wave a magic wand and turn you into a newt, summon dragons, or lead elves and hobbits on quests through magical wonderlands. He can’t do that—but even if he could, it would look a little different.

“When people want that Harry Potter magic, if I’m at the point where I can do that, you wouldn’t be able to see it,” he told the Daily Dot. “In your reality, you’re going to see me shitting my pants, raving like a lunatic. In my reality, I’m summoning cosmic forces and battling [Donald] Trump.”

“Being a wizard isn’t about having all the answers.”

A faithful practitioner of magic for more than ten years, Person, 29, approaches wizardry in a mindful way, focusing on the patterns he sees in his life and where they eventually lead him. People perceive their realities subjectively, according to Person’s philosophy, and one can create the path to their best reality imaginable. That, in a nutshell, is Person’s wizardry. He spreads that knowledge through his wizard consulting company, Person is Awake, LLC.

In his new book, Mysteries of the Deep, Person offers an introduction to the layman on how to navigate their lives using the “imaginative powers of magic.” In nautical metaphors, the book explains how people use what Person describes as the Subjective Submarine (body) through the Objective Ocean (reality), which he explains on the book’s Kickstarter page.

The Kickstarter to fund the print and distribution of Mysteries of the Deep ended April 1 at 4:20pm ET, having long surpassed its initial goal of $420. Person didn’t do much promotion for the Kickstarter beyond simple Instagram and Facebook spells. The campaign’s success relied solely on the spell Person cast in the fundraiser video.

He gave potential backers the option to choose between two realities. Those who didn’t pledge money to the Kickstarter stayed in their current reality, what Person calls World A. But those who did contribute have joined Person in World B—the reality he entered when he decided to be a wizard.

Person began to fully embody his wizard identity in April 2015, more than a year after moving to New York City from Austin, Texas. He took advantage of the gargantuan size and lightning pace of New York life that make one feel simultaneously anonymous and at the center of the universe, going against the hustle of the city.

With almost white hair and long light beard, Person certainly looks like a wizard, but this appearance came as a result of an experimental medication his doctor prescribed in lieu of surgery to treat a disease, called PVNS, that caused his knee to inflame. One year ago, Person’s hair was as dark as his beard was short—which is to say, very.

“It was an amazing coincidence. I did a ritual to become a wizard, I got put on pills that gave me white hair,” Person recalled. “The science approach is to try and assume causality. So when I say the two events happened, people go, ‘Your ritual didn’t cause this to happen,’ and I say, ‘I don’t care.’ … They both line up, they fit the pattern.” Regardless of whether or not Person’s spell actually worked—though all signs seem to indicate that it did—magic isn’t necessarily about exerting full control over reality, either. Person explained that much of the wizard philosophy involves trying to exert some control while also giving up some control and not worry about every minute detail of existence.

“Being a wizard isn’t about having all the answers. It’s about engaging with the world in a way that’s fun, mischievous, and chill,” said Person, adding that when you do notice the patterns, it’s worthwhile to stop and acknowledge them. He explained that once you assign meanings to patterns, then you will notice them more and more. And, who knows, perhaps the one time you acknowledge a pattern could be the difference between meeting your soulmate or landing a dream job.

For instance, if you are walking down the street and hyper-aware of Minions, you will stop and look: They are, admittedly, everywhere. One particular Minion catches your eye in a mural. You stop to photograph the mural and post it to your Minion-dedicated Instagram. That moment of pause causes you to miss your train. You board the next train six minutes later and run into your friend you haven’t seen in years. Because you stopped to acknowledge the Minion, you are now in the reality where your friend is back in your life.

Of course, that’s just one reality of many.

Person’s approach to wizardry is rooted in its accessibility, tinged with some levity—and weed jokes here and there.

“Front-loading [the Kickstarter] with an 80-page manifesto about how magic works… no. I’m having fun,” Person said. “I’m a silly weed wizard, and I’m having a great time. If you would like to join me  in World B and have fun, maybe you should read my book.”