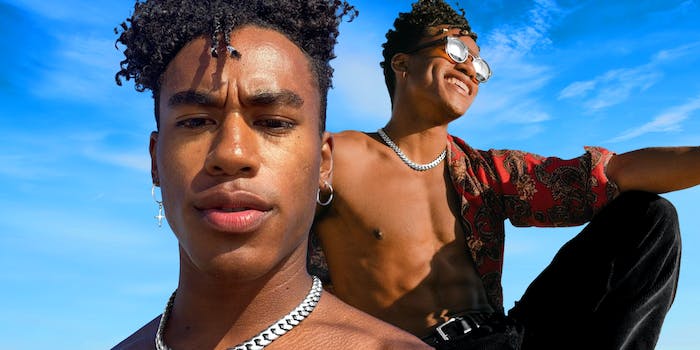 'As beautiful as it has been to be a beacon of light and joy for people online, I think the hardest part of being known for that was just allowing myself to also be human.'

This week, we spoke with Perris Howard, a creator with over 498,000 followers on TikTok and Instagram. Howard is a true multi-hyphenate, and has ventured into original music, singing, dancing, acting, modeling, comedy, and lifestyle content.

Howard rose to prominence on TikTok in 2020 for his frequent use of the #BlackBoyJoy hashtag on dancing, lifestyle, and singing videos. In an interview with Passionfruit, Howard said his use of the hashtag was intended to spread light during a dark and traumatic time for Black people, and to combat stereotypes against Black men in particular.

We also spoke with Howard about the challenges of being known for #BlackBoyJoy, got best tips for other creators who want to integrate advocacy in their work, learned about his favorite social media tools, and heard his future aspirations for music and acting.

What tips do you have for other musicians or dancers who want to use social media to market their art?

Create art that they love more than anything else. Consume and follow art from people that inspire you. Get involved in a community that inspires you and encourage other people with comments. Seek collaboration from like-minded people, because being inspired by artists that are like you would do even better than being by yourself.

What type of content performs the best on your social media accounts, and why do you think it does well?

My videos where I’m just carefree and vibing to music out in the streets. It performs the best because they feel my energy through the video, and it makes people feel happy. It’s nice just seeing someone genuinely being themselves authentically online and it connects with people.

What are your favorite social media tools?

I love Videoleap, it’s the easiest tool straight from my phone!

What was the inspiration behind the choice to include #BlackBoyJoy in many of your videos?

It all started in 2020 when there was a lot of Black trauma being shown online. And as important as the trauma that a lot of my people were going through, I think it was just so important to remind ourselves that there is a reason to be joyous in the world. And that joy exists in the world and that we didn’t have to be. It was exhausting to get bombarded with death and trauma and so I wanted to uplift people’s spirits and basically be the light that I always knew that I was.

What advice do you have for creators who want to integrate advocacy into their work?

Aside from the obvious bit that you should only do something if you truly mean it, find a cause that speaks to you the most, either something that’s been put on your heart or that you can personally relate to. Doing something that truly aligns with who you are or what you’ve experienced is always going to be easier to integrate and will also come off as more genuine.

When I lived in NYC, I promoted a non-profit called Children of Promise NYC, which mentored and offered after-school programs for children whose parents were incarcerated. My dad was wrongly incarcerated when I was a kid, so supporting this non-profit meant so much to me. There are obviously universal causes we should all want to support, but we all have the potential ability to make huge impacts on even the smallest, most unknown initiatives, especially if it’s something we’re truly passionate about.

What has been the most challenging part of sharing your work online, and how have you dealt with it?

Most people know me through #BlackBoyJoy, and as beautiful as it has been to be a beacon of light and joy for people online, I think the hardest part of being known for that was just allowing myself to also be human both on and offline. The internet can unrelentingly demand our time and attention, and if we aren’t properly taking care of ourselves, we’ll find that we’re trying to fill out the cups of an audience while being empty ourselves. Learning the balance of giving to the world while also taking care of myself is the only way I can ever express true joy, otherwise, it’s just a show, and I never want it to be that. That balance has always been the biggest challenge for me, so I take breaks from being online and do lots of self-care when I need to. I fill my own cup of joy first by doing things that mean the most to me. One of those things is closing myself off from the world to make music.

For me, like many others, your pop-off moment can happen at any time. Knowing it’s unpredictable, you can’t always plan your next steps the best. That being said, I wish I had a little more order in my goals from the beginning. It’s always better to carve a path from the jump than to cut down two-story trees. Though what I did have were amazing friends that were there to help me organize and give advice when I needed it. Everyone needs that. Abby Nierman and Diane Ng were my angels from the jump, and I’m so grateful for them. Either way, I believe everything happens for a reason, and everyone’s path is full of lessons that are learned and taken in at the times they need to be!!

What are your current goals?

Music and acting have always been my passions, but currently, music is my main passion. I’ve been sharing a lot of music content this year. That’s been my favorite thing to share with my audience, and I’m glad it’s been received so well. I’m planning to release a song by the beginning of next month, and another by August. This is my main priority right now, so I’m excited the most for that. In acting, I have overarching goals to have a leading role in a series like Euphoria and be a Marvel superhero, more specifically Miles Morales’ Spider-Man. I love Spider-Man so much. I’d also really love to work with Kid Cudi, Tobi Lou, Amine, and Smino.

Thank you, Perris, for speaking with us!

Are you a multi-hyphenate creator? Email [email protected] for a chance to get featured in an upcoming newsletter.