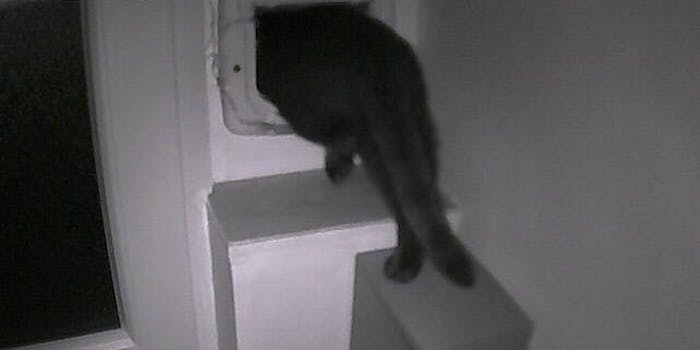 With all the mobs and the election and the public shaming, Twitter has lost a lot of its original whimsy. The bot-building community is now the locus of fun and delight on the microblogging service, and there’s no better example than Pepito the cat, whose cat door is linked to a Twitter account that tweets a photo whenever he goes in or out.

What we know about Pepito: He’s a small black cat. He lives in France. He has access to a cat-sized portal that allows free ingress and egress.

The Pepito bot has tweeted more than 9,000 times, a steady rhythm of “Pepito is out” and “Pepito is back home.”

The photos attached to each tweet are almost indistinguishable from one another—cats are creatures of habit, and Pepito tends to enter and leave the same way each time. Occasionally, he’ll pick up some speed, and the camera will only catch a grey streak or an open cat door with Pepito already out of sight.

On one rare occasion, he caught a mouse.

It wasn’t always thus, though. Technology has changed since 2011 and 2012, when the Pepito experiment began—with older cameras, a different cat door, and a different language.

Technology often serves to disconnect humans from nature, and the Internet, especially, is a parallel wilderness with no animals—just bots. So, as creepy as it would be if there were a Twitter account showing us entering and exiting our homes, it’s kind of adorable when there’s one for an animal. There’s something comforting about getting little updates about the cadence of Pepito’s life.

Pepito is out. Pepito is back home.