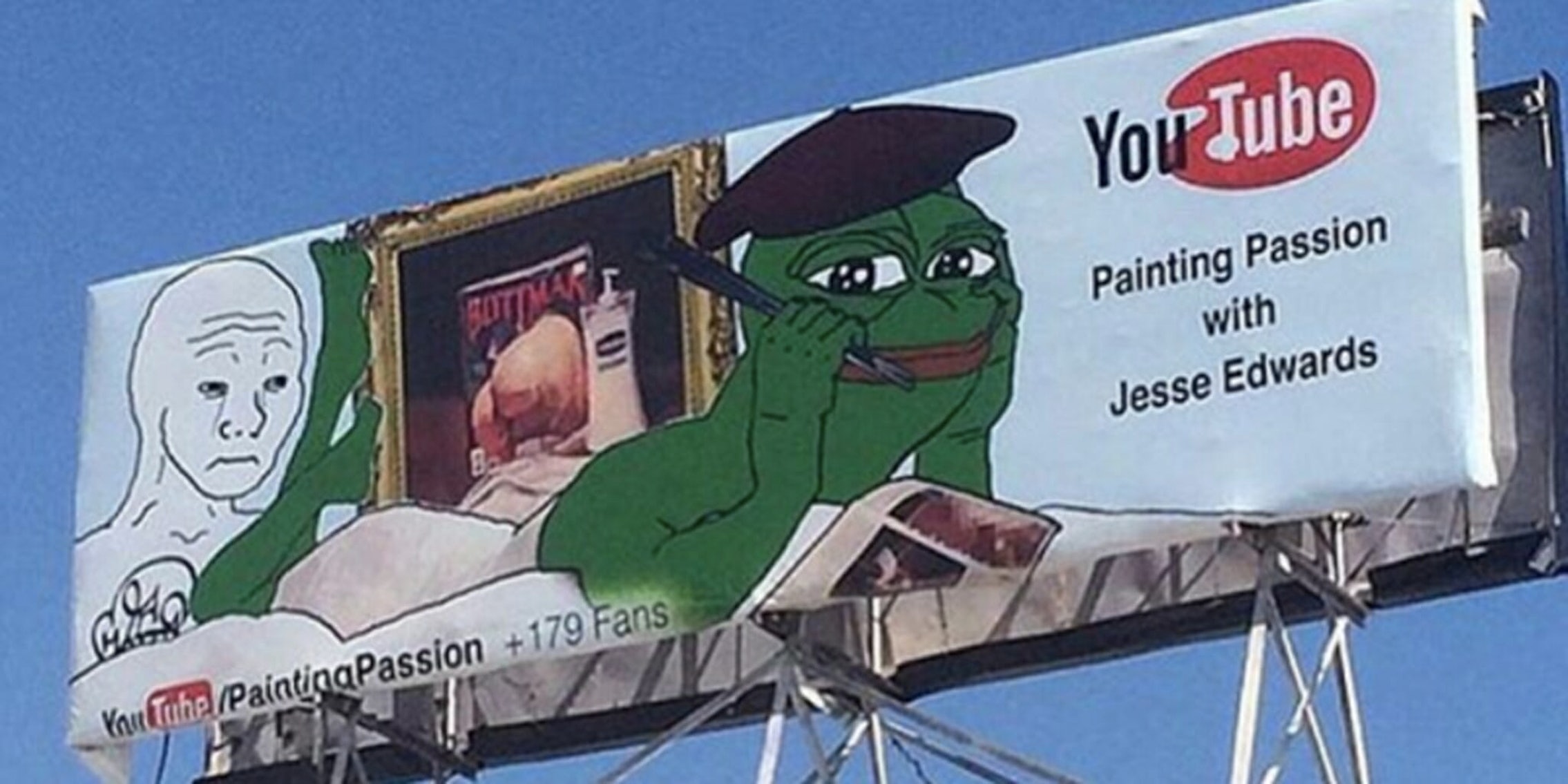 'Trying to make some meme history.'

One artist wants to make America dank again, starting by teaching its citizens how to paint.

No, his name is not Bob Ross. We’re talking about Jesse Edwards, an American fine art oil painter. And he’s recently gotten the Internet’s attention for a Los Angeles billboard that depicts a saucy Pepe wearing a beret alongside a Feels Guy, two legendary, long-lived memes.

The billboard sits atop 6817, an art gallery in L.A. aptly located at 6817 Melrose Avenue. Edwards thought that this extremely rare Pepe would be the perfect icon to advertise his recent art show and his YouTube channel, Painting Passion.

“I’m a huge Pepe fan. There’s something special about him,” Edwards told The Daily Dot. “And the spirit of Pepe is in me and that’s what I try to convey to my audience in the Painting Passion episodes.”

Through his videos, Edwards hopes to reintroduce classical art into American culture. Classically trained, he wants to to teach rigid technique and how to translate the 3D world into a 2D picture. He loved Bob Ross as a kid, but he says that the beloved curly-haired painter had a technique unique to himself, while Edwards has been taught methods artists have been taught for hundreds of years.

The show only has four episodes, which all include some sort of plot and, eventually, some actual painting. A still from “Painting Passion 4: Body Count” is actually the other side of the billboard.

“I do a TV show on YouTube that’s very Pepe-esque, meaning that there’s things going well on it that aren’t gonna do too well in the corporate world,” he said. “The concept of my paintings is that it’s funky stuff. That’s the beauty of Pepe. We can’t have Pepe to sell Dunkin’ Donuts because last time I checked up on Pepe he was part of a human centipede. Once you Google that guy, it’s no-go.”

Edwards’ most recent art show, which ran until November 21, was in the gallery under the billboard. Titled Let’s Watch TV All Day, it included paintings and ceramics that used the likes of Disney, Super Mario, and other cartoons to comment on our screen-obsessed culture. Vice wrote that the show hits upon “a juxtaposition between style and subject matter, showing a side of American culture that we don’t necessarily want to see.”

Edwards cooked up the idea to use memes to advertise his work because people largely post them on social media. He expected that people would see the billboard and share photos of it. (A popular meme was also a clever choice because it’s both instantly recognizable and not trademarked.)

A picture of the billboard has been popular on Tumblr, racking up nearly 80,000 notes. While the caption of the photo (“somebody is paying for this billboard”) is a little sarcastic, the number of likes and reblogs the post has speaks to the meme’s enduring impact.

Reception for the meme billboard has mostly been positive if you read the comments on Edward’s Instagram post of the masterpiece, but there is some pushback. One YouTube user posted on the Painting Passion page, “I saw your billboard. Stop abusing memes, f****t.”

Edward’s love for Pepe runs deep—the frog is even the little symbol that shows up next to his website’s title in your browser’s tabs. Before Pepe, Edwards was really into Grumpy Cat. But once the artist came across the big-lipped amphibian on his friend King Soloman’s Instagram account, it was the beginning of a new meme infatuation.

“I wanted the billboard to be a piece of art, to take these funky memes into reality,” Edwards said. “Trying to make some meme history. You never know until you make it.”