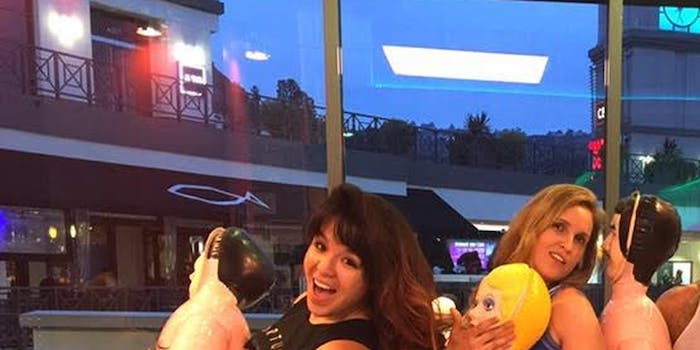 Facebook’s ‘People You May Know’: An interview with Drew Kaufman

“Twitter is sort of a diary of my brain farts.”

Social networks, you may have noticed, make it their business to sell you on new connections. On Facebook, the list of potential acquaintances is titled “People You May Know”—but more often than not, we don’t.

What if we read these names as recommendations? Could Facebook set us up with a mystery friend the same way Netflix steers us toward unfamiliar movies we’ll enjoy? In this series, we aim to explore the possibility (and weirdness) of a relationship based on nothing more than an algorithm’s say-so.

After a delightful first interview with novelist Gabriel Roth, I spent months trying to find a subject who didn’t recoil in disgust or ignore me entirely when approached with this idea. In the end, a friend request came through from one Drew Kaufman, a comedian, cartoonist, and critic who once played drums on Late Night With Jimmy Fallon. It only seemed fair to have him fight for the right to camaraderie on a digital first date. Along the way, we addressed irksome self-promotion, Donald Glover, and the absurdity of Facebook events. Firstly, since you friended me rather than vice versa, I should ask: did Facebook recommend me?

No, someone I know shared one of your posts and I like your work.

Small world, social media. [Checks Twitter, sees that Drew just followed him, does a little fist-pump.] How would you compare your presence on the two platforms? What will I get from Facebook Drew that Twitter Drew is holding back, dammit?

I think it’s the opposite, really. I don’t really care about Twitter. It’s where I put my thoughts when I have no one to tell them to. Twitter is sort of a diary of my brain farts. Facebook is slightly more curated because it’s the thing I use to share bullshit with a huge percentage of people I have interacted with my entire life. Maybe what you’re getting from Facebook that I am holding back on Twitter is humility.

That’s a fascinating idea. I use Twitter in a similar way but have it set up to cross-post to Facebook, which actually seems insane when I say so? Or at least deliberately annoying?

To circle back to Facebook’s matchmaking algorithm: I’m actually surprised that it hasn’t set us up before, since we have a ton of mutual friends in the New York comedy scene, thanks in part to my abortive stint with the Upright Citizens Brigade. So can I expect a lot of show invites?

From me? Not really. I am not nearly as involved as I was a few years ago, and even when I do something I rarely send out an invite. I think that’s more of a improv problem. I stick to sketch and occasionally stand-up.

Cool, I generally have no problem with two-drink minimums. How about parties? Do I get invited to those now?

I don’t think I’ve ever thrown a party in my life. I think the last non-comedy show Facebook event I did was in 2007, when I lost my Motorola Razr.

Are you a Facebook event guy? Do people even look at events anymore?

I usually just RSVP to things in the hopes that people will spend the entire time asking each other where I am. For my own stuff I just email. Actually, even my wedding invitations were emailed, it was awesome. Anyway, what are some things I could do to be a really great Facebook friend?

That’s crazy about the email wedding invites. We live in the fucking future. I couldn’t tell you how to be a great Facebook friend. I guess it would be more about what you don’t do.

The usual sort of thing. No clickbait. Incredibly blurry JPEGs that have passed around the Internet for decades.

It’s hard to say. You know what makes a good Facebook friend? Self-awareness.

Would you say you unfriend people easily?

Almost never. I have definitely used the unfollow feature a lot more the past few years. But other than racism and homophobia, it’s pretty hard to cut all ties.

So we’re in it for the long haul, but you may have to start ignoring me at some point. Seems fair.

I don’t think I would ignore you unless you suddenly switched to hourly self-promotion.

Don’t worry, I have yet to sell this collection of sci-fi sexts. Are Facebook and Twitter ever useful for trying out ideas for stand-up or sketch? I do like to laugh.

Oh yeah. Sometimes I will get super excited about an idea and I’ll make it a tweet or a status or just something else before I execute it. Other times I’ll make a joke and then look back at it a while down the road and expand upon it. I do feel weird about it because I think a lot of people really get mad about those sort of things. I remember I once saw Donald Glover do stand-up, and he told some jokes that he had tweeted once before, and people actually got mad, as if somehow it was insincere or they got ripped off.

As if almost every joke you hear in a stand-up set hasn’t been uttered in dozens of other shows!

Yeah, it was very bizarre. But it’s a real thing. I think you have to constantly maintain the illusion that a comedian is an endless well of new ideas.

The only one of our mutual friends I can’t really figure out is Jill Hornstein. How do y’all know each other? (She and I grew up in the same neighborhood in New Jersey.)

I dated Jill’s old roommate for about eight days.

Amazing. Well, just in case Jill is reading this, I want to say that I still remember how the high school yearbook staff once left the ‘H’ off of her last name. I believe that when she told them her picture was missing, they told her to check under ‘Ornstein.’ Why would I remember such a thing?

Because that’s ridiculous. I love that they said “check under a name that is not yours” and not “sorry.”

Not their style. Of our mutual friends, who do you think could best facilitate a three-person IRL hangout?

Probably Pilot [Viruet]; she is constantly hosting events. In fact, that is probably going to happen at some point. Ariel Greenspoon would be fun because then we would be in Austin.

Where the Daily Dot has its headquarters, no less! Either way, looking forward to it. I think this is the beginning of a beautiful Facebook friendship.

Otherwise I will just quit the Internet, naturally.

If only such a thing were possible…