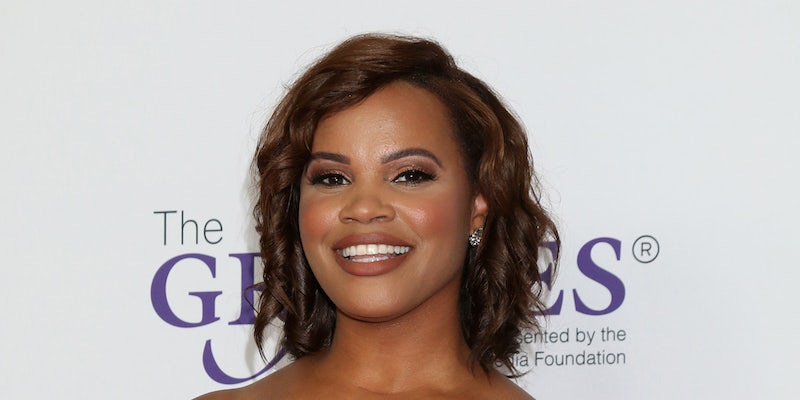 The rumblings that Mike Richards might become the next permanent host of Jeopardy is upsetting some fans of the show. That’s in part because, as Imani Gandy reminded people Friday morning, late longtime host Alex Trebek had already tapped Laura Coates to succeed him.

As the Daily Dot reported yesterday, a number of fans are advocating for another Black candidate to be the permanent host of the show—especially in light of news that Richards, who is white, is in advanced negotiations to take over the mantle of the popular game show.

‘The search for his replacement is proving very divisive,” the Dot reported, “with viewers holding strong opinions about who should take the job. Some of the strongest opinions revolve around LeVar Burton (Star Trek: The Next Generation; Reading Rainbow), a popular choice who inspired a headline-grabbing fan campaign to become the next Jeopardy! host. But it looks like that campaign didn’t pan out.”

Burton was part of a team of guest hosts who have carried the show in the interim.

Richards also happens to be the executive producer of the show; that led one observer to comment, “Some real ‘Dick Cheney leading the VP search committee’ energy here,” referring to the 2000 election where Cheney headed up the quest for George W. Bush’s running mate only to end up with the role.

Gandy, going to Twitter in response to a tweet calling the “Jeopardy situation” a “mess,” started by saying, “Wait.”

And then, “Alex Trebek named a Black woman, Laura Coates, to succeed him and they went with a basic white man who also happens to produce the show?”

“And they gave LeVar Burton like five days in the middle of the Olympics,” she added. “Why even bother. Just give it to the white guy from jump.”

She then went on to add, “My mom hasn’t been watching Jeopardy because she hates the dude who is currently on a winning streak. Wait ’til I tell her about this shit.”

Coates had at least one fan on Twitter who concurred. “Laura Coates? The incredibly beautiful woman on CNN who never had a blemish or a hair out of place?!” asked Twitter user @EllaSlammin. “Oh man. She’s be SO good. I’d love to watch that.”

Another Twitter user, using the handle @BlackAmazon, observed, “Alex Trebek had a handpicked successor. It was a Black woman. He named her FOUR YEARS AGO — three years before old boy EVEN WORKED ON JEOPARDY.”

The Today profile also mentioned Coates was a CNN legal analyst with a talk radio show on SiriusXM, an adjunct law professor at George Washington University School of Law, and the author of the 2016 book, You Have the Right: A Constitutional Guide to Policing the Police.

After Trebek’s death, Coates tweeted out a remembrance about the beloved host.

Richards was not mentioned.