These people really, really want to have sex with Pennywise from ‘It’

With Halloween coming up it’s no surprise that the recently-released It film is still being talked about. The movie has been commercially and critically acclaimed, having earned over $572 million worldwide. It’s also birthed a Tumblr titled “Your Darkest Desires,” in which people confess to wanting to have sex with Pennywise, the antagonist of the film.

Warning: This is NOT safe for work. Not at all.

An adult Sophia is awakened by something underneath her bed. The noises persist so she slowly lowers her head and comes face to face with two glowing, yellow eyes staring back at her. She rises back up on her bed trying to convince herself it’s an illusion, but out from under the bed appears Pennywise.

Pennywise hops around as he repeats the word, with Sophia becoming amused with his antics. She laughs under her breath and Pennywise notices, his smile slowly widening as he faces away from her.

Pennywise quickly turns around and charges at her, his teeth having grown and his glowing eyes piercing through the darkness.

PENNYWISE: WHAT ABOUT NOW?

Pennywise can sense Sophia’s fear but he also senses something else—something sensual. He stares her in her eyes as she smiles back at him, slowly moving her fingers across his Harlequin suit. 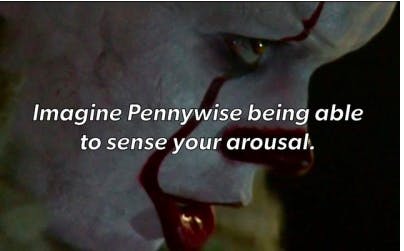 SOPHIA: Did you think you scared me? I don’t scare too easy. You’re gonna have to try harder than that clown.

Sophia emphasizes the “C,” which intimidates Pennywise. Normally he has a thirst for blood but now he has new thirst he’s never had before—lust. They begin to kiss, his plump and red lips surprisingly tender. Sophia can tell Pennywise isn’t used to this so she pauses briefly and puts her hands on his face.

SOPHIA: Are you ok?

Sophia throws Pennywise to the floor which upsets him but before he can do anything she’s slowly crawling to him, unzipping his pants and feeling something rather large in the process.

SOPHIA: Something tells me that isn’t a balloon.

Sophia starts going down on Pennywise. He starts breathing rapidly. Sophia can tell that he’s nervous so she grabs his hands and puts them in her hair.

which leaves Pennywise’s eyes wide open. Sophia then guides Pennywise back to her bed and slowly grinds on him. She turns back to see his face—that mischievous smile has returned. 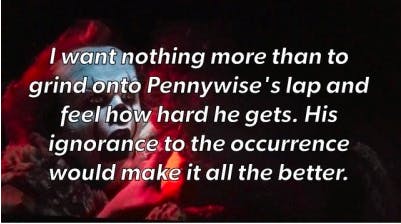 Sophia pretends to walk away but Pennywise grabs her by the waist and seats her on his lap. This is the moment Sophia has been waiting for as he lays her on the bed and they start having sex. His eyes glow with a carnal, fiery passion, as his sharp, yellow teeth gently gnaw on Sophia’s neck. As he starts to sweat his clown makeup begins to come off but Sophia could care less, screaming for Pennywise to come.

Pennywise rolls onto his back staring at the ceiling in silence before slowly turning his head to face Sophia, who’s been staring at him the entire time.

PENNYWISE: This was… fun?

SOPHIA: I think you popped a little sooner than I wanted but not bad.

Sophia falls asleep. Pennywise contemplates killing her since that’s was what he originally wanted to do but he likes this and wants to try it again so he spares her, slowly moving his claws down her back until he falls asleep.