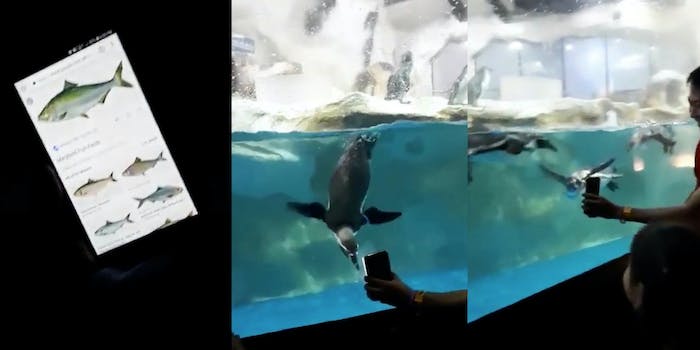 The fish were a red herring.

Nobody, including vulnerable zoo animals surrounded by endless streams of gawking humans and bound by captivity, likes being teased.

But one family in the Philippines apparently tricked a pair of penguins into chasing after some fake fish by flashing a phone screen to the animals.

According to MSN, the family was visiting Manila Zoo, located in the country’s capital on the island of Luzon, but had missed the penguins’ feeding time. So one family member pulled up images of fish on his phone and showed them to the penguins through the glass.

It apparently worked. The man commanded the penguins’ attention as he moved his phone along the tank.

“We visited this place, but our ticket doesn’t include feeding them. To please the kids, we had to be creative,” Edson Doromal, who filmed the viral video, told Newsflare.

The penguins were clearly responsive, but who’s to say whether they could actually make out the tiny fish on the man’s phone? Maybe they were just attracted to the light bending through the glass and water. Just as well, it’s probably best to keep your blinding phone screens away from zoo animals.