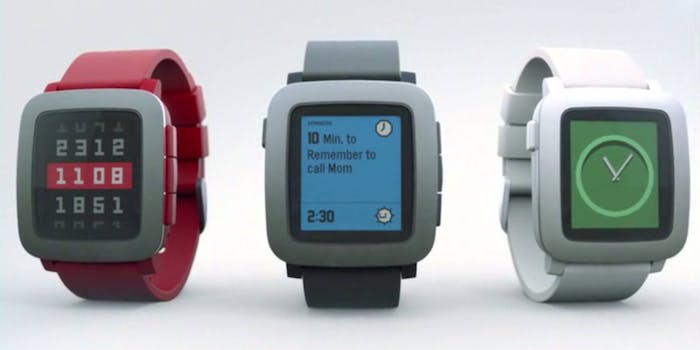 Who would pass up on the opportunity to convert beta users into outspoken evangelists?

This week, a relatively small, unknown company took the tech media by storm in a way that small, unknown companies typically don’t. On February 24, the Pebble Technology Corporation announced a new, one-month Kickstarter campaign for Pebble Time, its latest smartwatch. Its first generation smartwatch amassed $10.3 million on Kickstarter in 2012, and the company has sold over 1 million of those watches thus far. This recent iteration has improved battery life and a smorgasbord of new features, and the company sought $500,000 to fund it. It blew past that goal in minutes and has so far amassed $10.3 million in pledges with 29 days to go.

Though Pebble is just a tiny blip on the tech market in terms of units sold and revenue, it received international media coverage in just the first 24 hours of its campaign, everywhere from the New York Times to the Wall Street Journal to every tech website in existence. This universal coverage isn’t a result of mere tech innovation; it’s an inherent side effect of crowdfunding, a mechanism that, in addition to raising much-needed financing, also incentivizes users to evangelize on the product’s behalf, creating a helpful feedback loop of more donations.

Let’s say the owners of Pebble had, instead of raising money via Kickstarter, gone the traditional route and raised $10 million from major venture capitalists. Yes, the announcement would have received coverage, but mainly within just the tech press, and the news likely wouldn’t have been seen by anyone but gadget obsessives. For instance, an information technology company called ScienceLogic just raised $43 million in venture capital funding last week, yet it didn’t receive near the coverage of Pebble, despite raising four times as much money.

The reason Pebble has made such a splash is because every donor to a crowdfunding campaign is a personal stakeholder who wants others to donate so the company can reach its fundraising goals. He or she is incentivized to share it to their social media channels. And once there’s enough social media buzz, then reporters who witness this groundswell feel compelled to cover the campaign, leading to more donors. It’s a nice feedback loop. To date, 10,000 Twitter users have tweeted links to the Pebble campaign, and the Facebook shares are likely many times that number.

Every donor to a crowdfunding campaign is a personal stakeholder who wants others to donate so the company can reach its fundraising goals.

I’m guessing that the makers of Pebble noticed this phenomenon their first time at the crowdfunding trough, and it most likely influenced their decision making when determining whether to crowdfund again or raise money through other means (the fact that Kickstarter donors take no equity was likely another motivating factor).

I think there’s a lesson to be learned here for any startup—that crowdfunding should be considered not only for its ability to raise money but also as a word-of-mouth platform. If you do plan to go with venture capital money, you may still want to extend a crowdfunding option even if the money raised from it isn’t strictly necessary. After all, who would pass up on the opportunity to convert beta users into outspoken evangelists? All the venture capital in the world won’t help you if you can’t get your product in front of consumers.