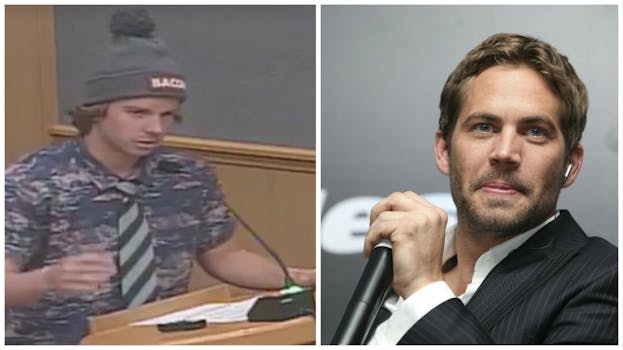 Too bad. Walker would make for a beautiful statue.

If you, like a lot of Americans, have completely lost faith in our institutions’ abilities to inspire, well, prepare to continue to be disappointed.

Long gone are the days of FDR’s Tennessee Valley Authority and the Work Progress Administration, which showed the American government could dream big and, more importantly, deliver.

Nowhere is that lack of esprit more apparent than at the San Clemente City Council.

This past week, Chad Koeger (not the Nickelback one) and Bodhi Johnson (not the Point Break one) tried to get their local government to do some good.

How? By building a 20-foot tall statue of the bro who inspired them the most, Paul Walker.

"And now for something completely different…" –Monty Python. At Tuesday's City Council meeting, Chad Kroeger and Bodhi Johnson, as their names were spelled on public speaker cards, gave the city's elected officials a suggestion to inspire people who come to #SanClemente.

Not only did Koeger say that seeing Walker in the original The Fast & the Furious was what lifted him out of the long “melontrolley” of a breakup, his compatriot says that Walker taught them to never back down.

Unfortunately, the cold-hearted city council says no to them, with barely a thought.

Which is probably OK, because it was very likely just a viral stunt, the work of comedy show Chad Goes Deep, which follows “Chad and the fellow leader of his squad, Bodhi, as they embark on an epic quest for knowledge, truth, and face sitting.”

That’s not to say, though, that the chiseled good looks of Paul Walker wouldn’t make for a great statue. He’s pretty much a modern day David.