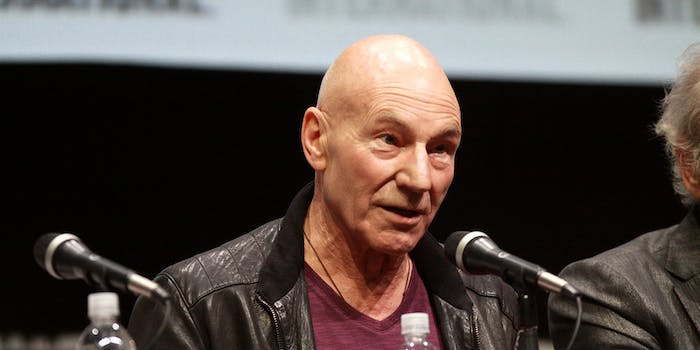 His pain is our gain.

When our beloved Sir Patrick Stewart married longtime girlfriend Sunny Ozell back in Sept. 2013, he had no idea what he was getting himself into. On Christmas Eve, Ozell subjected the X-Men and Star Trek actor to something much worse than a costly divorce or attention-starved children: The silliest holiday hat you have ever seen.

As Stewart’s expression oscillates between visible disgust and suppressed laughter, Ozell keeps the camera rolling, much to the delight of thousands of YouTube viewers.

Poor Sir Patrick. While his BFF Sir Ian McKellen is off on the late-night talk-show circuit promoting the last Hobbit movie, he’s sitting in front of a drab wall as a festive monstrosity sings and dances atop his bald head.

One good thing did come out of this: Star Trek: Nemesis and X-Men: The Last Stand are no longer the most embarrassing things in which Stewart has appeared.