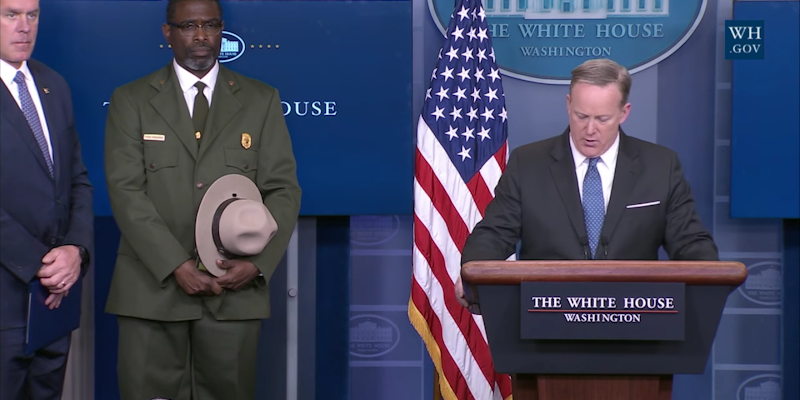 A park ranger made the most amazing face while accepting a check for Donald Trump's salary.

After elected, President Donald Trump pledged to donate his entire salary to charity, because he didn’t need the money. Now, he’s making good on that promise.

But the organization he chose raised a few eyebrows.

One of the very first government offices that Donald Trump clashed with was the Department of the Interior, in a kerfuffle over his inauguration crowd size that now seems tame by this administration’s standards.

Perhaps in an effort to soothe things over, Trump made his first salary donation out to the National Park Service. He gifted the service the first quarter of his yearly salary, to the tune of $78,333.

The exchange was broadcast at the beginning of Sean Spicer’s press briefing on Tuesday, and one Twitter user noticed what could very well be considered some incredulity on the face of Harpers Ferry National Historical Park Superintendent Tyrone Brandyburg.

People ate it up.

We are all this park ranger. https://t.co/j9UDsEOAt2

The most "I'm just here so I don't get fined" look of ever. https://t.co/nWMWWQ3lPi

When you get that first paycheck and realize taxes ate the fist two days of the work week https://t.co/Z7sEQkdmGd

Me when a professor says "This isn't going to be on the test, but we should go over it anyway" https://t.co/Xz3ZwB7Ab7

Yeah, I think that is the face of about 70% of Americans right now. https://t.co/aWxoi0rC1f

Admittedly, he probably wasn’t looking a gift horse in the mouth, but it really is hard to wrap your head around the incongruity.