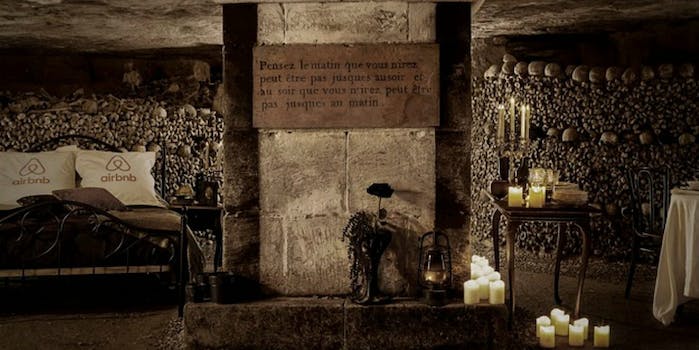 Airbnb is sending one doomed soul to the Catacombs of Paris

Be wary of the 4 people you might meet down there.

If you like sleeping in overcrowded, damp, dank accommodations while having a holiday in France, Airbnb has the contest for you. And if you win, you’ll be guaranteed to sleep like the dead. Or, at the very least, in their general vicinity.

From the people who brought you the chance to sleep over at Fenway Park comes the opportunity for you and another person to spend Halloween night inside the Catacombs of Paris, where the remains (and the souls) of 6 million people are spending eternity.

On Halloween night, journey to the center of the earth and learn about the hair-raising history of this mysterious subterranean labyrinth. Satisfy your thirst for adventure in the sprawling network of skulls and bones. Next, savor a dazzling culinary experience while enjoying a private concert in the most incredible acoustics under the earth. Before bedtime, a storyteller will have you spellbound with fascinating tales from the catacombs, guaranteed to produce nightmares. Finally, enjoy dawn with the dead, as you become the only living person ever to wake up in the Paris catacombs.

In order to win, one must convince the host before midnight on Oct. 20 why “you think you’re brave enough to sleep in the catacombs.” And it’d better be a good reason, because Airbnb reportedly has paid 350,000 euros (almost $400,000) to rent the space for the evening.

And sure, you probably are brave enough at this very moment. Sitting all safe and sound in your home, reading this on your computer by the fireplace or snuggled all safely in bed while scanning your phone.

But the catacombs don’t simply hold the souls of those 6 million dead. There are actual beings that reside below the streets in the tunnels of Paris. And they’ll scare the chaussettes right off your feet.

Technically, he’s not French. And he’s also no longer on TV. But that doesn’t mean he won’t frighten the bejesus out of you if you encounter him as he takes his nightly trip to the catacombs’ refrigerator for his midnight snack. Because when he starts laughing maniacally, people start dying tragically.

2) Phantom of the Opera

As long as there are no chandeliers nearby, you’ll probably be fine. Unless you happen to have a nice singing voice or own a theater.

He’s the cousin of the guy in the video below. Except the French version is a little less polite and doesn’t like Americans.

The Red Sox legend wasn’t at Airbnb’s Fenway Park experience, but he might very well show up at your sleepover to ask for a couple bucks and to explain to you why Muslims are the exact same as Nazis.

In reality, he might be the most chilling character of all.