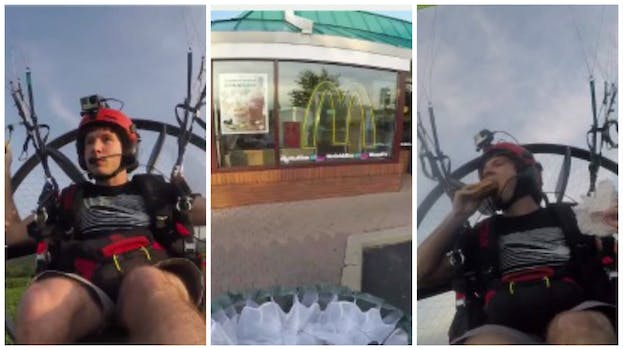 Watch this dude, in need of a fast-food fix, fly his paramotor to McDonald’s

How bad does Tucker Gott want to chow down on McDonald’s? Bad enough where he’s willing to risk his health flying through hay fields and over the tops of trees to get to that yellow beacon of greasy burgers.

Gott manages that using his trusty paramotor, basically a paraglider with a motor attached to it. Watch the video to see how he accomplishes this task.

Gott said people ask him if he can fly his paramotor to work or just simply to run errands. “Although it’s not really practical to do daily, I sometimes find an interesting place to land,” Gott wrote on YouTube. “This McDonald’s had a nice grass field that begged for a landing. Luckily, the local citizens found it intriguing and didn’t call the cops.”

And luckily Gott didn’t hurt himself in pursuit of a McDouble, especially considering he had to play two rounds of hay bale slalom.