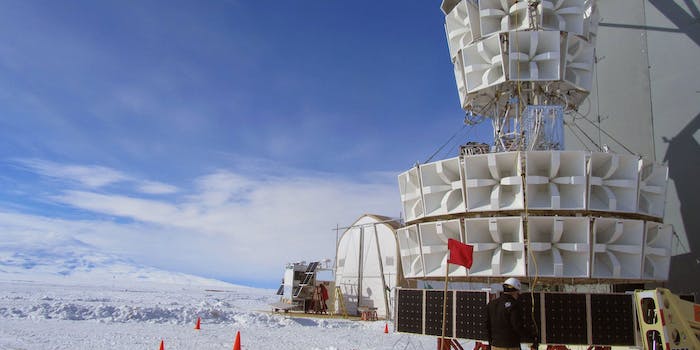 NASA scientists believe they may have discovered evidence of a parallel universe in which time runs backward.

The Antarctic Impulsive Transient Antenna (ANITA) is described as a balloon that sits in the stratosphere made to look for radio-wave signals. It was through the ANITA that researchers were able to detect an unusual occurrence: “a fountain of high-energy particles erupting from the ice” in Antarctica. Because high-energy particles typically come “down” from space and not up out of the Earth, the findings, which were outlined in New Scientist, indicate the particles were traveling backward in time—in line with that of a parallel universe.

“What we saw is something that looked just like a cosmic ray, as seen in reflection off the ice sheet, but it wasn’t reflected,” principal ANITA investigator Peter Gorham said in New Scientist. “It was as if the cosmic ray had come out of the ice itself. A very strange thing.”

The research is still being reviewed, and it is being questioned whether or not the particles are really traveling back in time. According to Gorham, not everyone is comfortable with the idea of a parallel universe.

And that includes some online, who began to post memes about the thought of a parallel universe.

“Why is no one talking about NASA detecting a parallel universe next to ours where time runs backwards??” one Twitter user questioned.

Armie Hammer even questioned why he hasn’t “heard a single thing about it.”

“Makes me wonder what other crazy shit is happening (ie. being done) while we are locked in our houses and distracted by corona?” he tweeted.

While the research was published by New Scientist on April 8, it was only recently picked up by various news outlets. Users online seemingly began reacting to the news after viewing the outlets’ tweets on it.

“Me and my girls going to the parallel universe nasa just discovered,” Twitter user @macksmorereese wrote, along with the reaction meme of people scurrying from a table and a man saying, “Alright this is it people. Let’s move. Let’s go, go, go, go!”

Many noted that it really doesn’t get more 2020 than this.

“So much already happened this 2020. May 2020: Hold my PARALLEL UNIVERSE,” Twitter user @kuyaaisko wrote.

Another questioned “what’s next for this year.”

“2020 has been wild. Not even mid year and there’s a pandemic, confirmed(ish) UFO sightings and a parallel universe plus some really confusing stuff with the government. Are we in a scifi show? I can’t keep up..” Twitter user @jovinegeorgeeee wrote.

Another user joked about the state of 2020, saying “aight y’all i’m going to the parallel universe, dm me if you want something.”