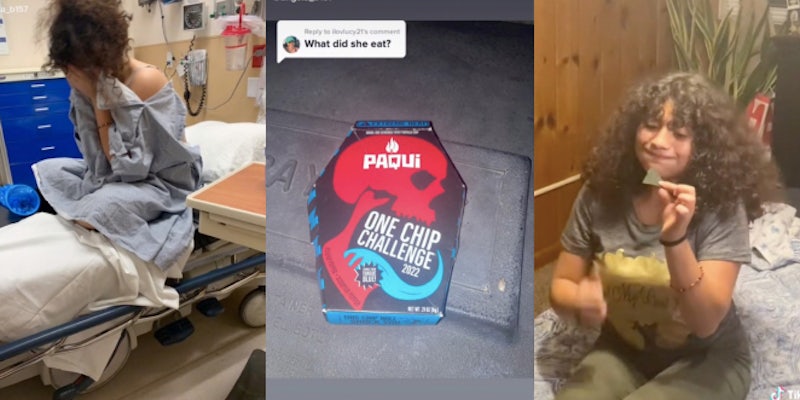 ‘$12 for 1 piece of chip and hospital bills’: TikToker says Paqui One Chip Challenge landed niece in the hospital

'Narrator: But it was indeed, that bad.'

A viral TikToker says her niece ended up in a hospital after participating in one of the latest social media challenges—the Paqui One Chip Challenge.

The TikToker, named Angela Trujillo (@angela_b157), documented her niece’s experience in a series of videos. One video, which showed her niece crying in a hospital, garnered 2.2 million views. A snippet of the video also showed her preparing herself to eat the notorious Paqui chip.

The One Chip Challenge is a social media challenge created by Paqui, a tortilla chip brand known for its spicy flavors. The challenge involves eating a single Paqui chip made with the Carolina Reaper Pepper and Scorpion Pepper, then waiting as long as possible before eating or drinking anything else. The chip is available on Amazon for $8.99 and in select stores.

The challenge has taken off on TikTok, with the hashtag #onechipchallenge garnering more than 672 million views. Multiple videos show TikTokers crying from the heat, yelling in pain, or guzzling milk after eating their Paqui chip.

The Paqui website contains a clearly displayed warning that states in all caps, “DO NOT EAT IF YOU ARE SENSITIVE TO SPICY FOODS, ALLERGIC TO PEPPERS, NIGHTSHADES OR CAPSAICIN, OR ARE PREGNANT OR HAVE ANY MEDICAL CONDITIONS. KEEP OUT OF REACH OF CHILDREN. AFTER TOUCHING THE CHIP, WASH YOUR HANDS WITH SOAP, AND DO NOT TOUCH YOUR EYES OR OTHER SENSITIVE AREAS. SEEK MEDICAL ASSISTANCE SHOULD YOU EXPERIENCE DIFFICULTY BREATHING, FAINTING, OR EXTENDED NAUSEA.”

Many TikTokers, like Trujillo and her niece, have still felt inclined to give the challenge a try. The TikToker posted an additional video confirming that her niece was hospitalized because of eating a Paqui challenge and another video showing her eating it. In the latter, the niece is surrounded by others watching her perform the challenge, and they count down from 10 to when she eats the chip. At first, she takes only a small bite of the chip, but at the onlookers’ encouragement, she downs the rest.

After finishing the chip, the girl says with tears in her eyes, “It’s not that bad, but it’s hot.”

The three videos documenting the challenge sparked a range of reactions among viewers. Some seemed to think the challenge wasn’t worth it.

“$12 for 1 piece of chip and hospital bills,” one viewer commented.

“‘It’s not that bad’ *ends up at the hospital,*” another viewer commented.

Several others joked about the niece’s comment in the last video.

“Narrator: ‘But it was indeed, that bad,'” one user wrote.

Another user said, “‘It’s not that bad’ this didn’t age well.”

“You said. Not that bad,” one viewer commented. In reply to the comment, Trujillo explained, “She said it wasn’t and then the heat kicked in lol it was bad so everyone stopped recording.”

In reply to a comment asking what happened at the hospital, Trujillo wrote, “So this was my niece her and younger uncle bet 45 for the dumb challenge so she did it the doctors basically told her not to do it again.”

The Daily Dot reached out to the creator via TikTok comment and to Paqui via email.