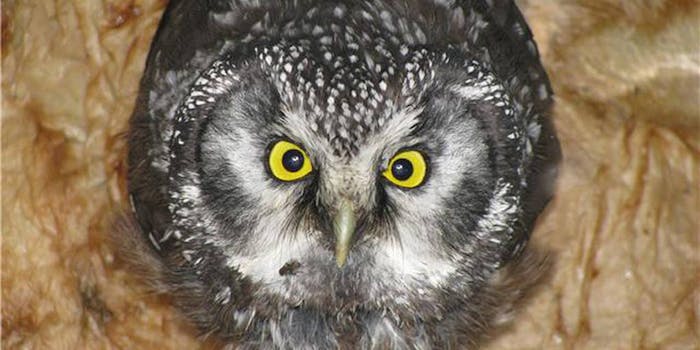 Freeing an owl from your home is easy!? Hoo says!?

Contrary to popular belief, when an owl invades a muggle’s home, it’s rarely there to drop you a letter of acceptance to the Hogwarts School of Witchcraft and Wizardry. Rather, it’s there to terroize you with the pie-eyed pupils of a coke addict and razor sharp tallons until its freed from the hell that is your Ikea-furnished apartment.

As you can see, when Colton Wright found an owl that his cat had drug into the house, you rarely get to choose how you react when face with such a situation.

After what Colton described as “40 minutes of hysterics,” which likely included a LOT of unblinking starring, the two seem to have come to a compromise that was more intense than any hostage stand off in history. It’s a moment so epic that it should no doubt be captioned by a thousand Carmina Burana imitations.