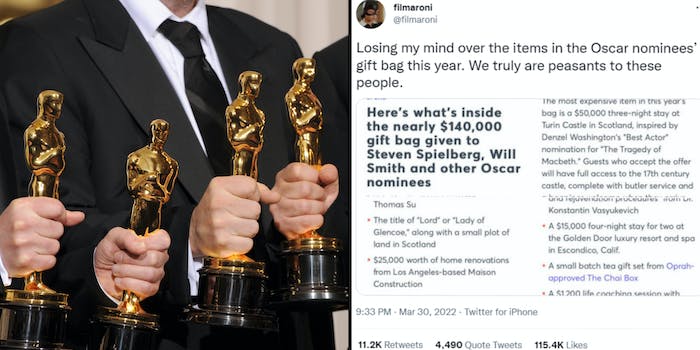 Every year, a group of Oscar nominees receives an extravagant gift bag of assorted items that costs more than many people make in a year and most would never be able to fathom, and this year was no different. But this year’s gift bag is raising eyebrows not just for how much it costs but also for all of the eccentric items inside.

According to a report from CNBC Make It, Distinctive Assets, a marketing company based in Los Angeles that’s been handing out the notorious “Everbody Wins” gift bags for the past 20 years, gave this year’s gift bag to 28 people: All 20 acting nominees, the five directing nominees, and Oscars hosts Regina Hall, Wanda Sykes, and Amy Schumer. This year’s gift bag is worth more than $137,000 and includes 53 items.

The most expensive item in the gift bag is easily a three-day stay in a Scottish castle that’s worth around $50,000, but some other noteworthy items in the gift bag included fancy popcorn, a voucher for a liposuction procedure, a life coaching session, home renovations, a four-night stay at a luxury spa resort, and a small plot of Scottish land.

A tweet that listed some of those items all in a row only went to highlight just how extravagant and obnoxious those gift bags were.

“Losing my mind over the items in the Oscar nominees’ gift bag this year,” @filmaroni wrote. “We truly are peasants to these people.”

For some people, it really illustrated the vast disparity of wealth, resources, and gifts that celebrities have access to that most people wouldn’t. It’s also the kind of thing that they might not even think or dream about even wanting or needing.

Ricky Gervais was among those who criticized the gift bags. In response to someone who suggested that Gervais should’ve hosted the Oscars, he went on a riff about how the luxury being shown off at the Oscars was only rubbing salt in the wound to viewers who might be facing hardships such as unemployment.

“Ricky Gervais is a talented comedian, so it’s no surprise that I find the hypocrisy of his ‘goody bag tweet’ hilarious,” Distinctive Assets founder Lash Fary told Metro. “While we do not spend money buying any of the items in our gift bags (much like advertising, this is simply a promotional campaign for brands), the valuation is indeed significant…but not nearly as substantial as Ricky’s recent Netflix deal, the residuals he receives for The Office or his multi-million-dollar home.”

But the item that’s caused the most controversy is the ability to obtain a title and a plot of land in Scotland. The legality of obtaining a lordship through purchasing souvenir plots—or gaining them through Oscars gift bags—is not legally sound and it won’t give them any Scottish land.

In an open letter to gift bag recipients, Andy Wightman, a former member of the Scottish Parliament, broke down what obtaining land and a title through Highland Titles (the company offering the item in the gift bag) actually means.

First and foremost, you are not the owner of any land in Scotland despite what this company might have led you to believe. See Section 22 of the Land Registration (Scotland) Act 2012. (1)

You have also not been given any right to style yourself Lord or Lady of Glencoe. Highland Titles has no authority or power to bestow such a title on you.

You have a piece of paper (several probably) with impressive sounding claims and illustrations. They remain just pieces of paper, however and provide you with nothing more than that.

(Highland Titles, which allows anyone to become a Lord, Laird, or Lady of Glencoe after purchasing a 1 square foot plot of land for as low as $45, has sworn that it is not a scam.)

Some found the prospect to be rather amusing.

But for others, the whole idea of offering up Scottish land is just an insult to actual Scots because historically, they haven’t had the chance to purchase their own land at all.

“Scotland is one of the last places in Europe where land can be bought and sold on a whim with no questions asked,” National columnist Lesley Riddoch wrote in a petition calling for the removal of Highland Titles’ title and plot of land incentive from the luxurious gift bag. “As a result a tiny number of people own the land – fewer today than in 1872. This storm in a Goodie Bag reminds Scots why land reform is urgent and necessary – to turn the ownership of our beautiful country into the shared responsibility of Scots, not a trinket to be traded by strangers.”

Riddoch’s petition has been signed by more than 7,000 people to date.