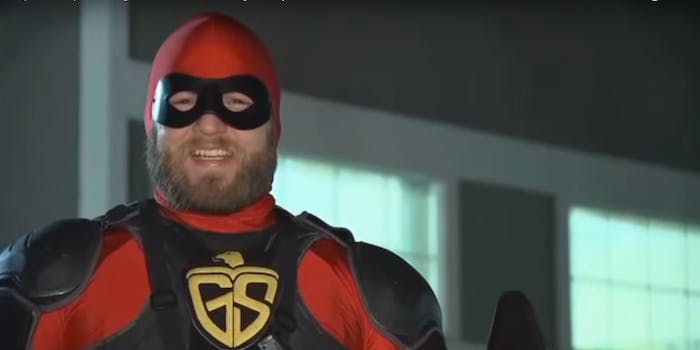 The Guardian Shield is here to defend Beaverton, Oregon.

The townspeople of Beaverton, Oregon, can rejoice knowing they’ve got their own personal superhero to defend them from shortsighted evildoers in Washington County.

After nine years of training, the Guardian Shield has assumed the role of chief protector. He patrols neighborhood parking lots after dark donning a red costume and armed with a flashlight, pepper spray,  first-aid kit, GoPro camera, baton, stun gun, and a Kent ballistic shield.

The caped crusader is masked, because he’s not in the superhero game for the glory, but the satisfaction that his city can sleep peacefully. Explaining his dedication, the Guardian Shield tells FOX 12 Oregon, “I want to be taken seriously… Everything I do is legit, as much as possible. I make sure no one is breaking into cars, no one’s fighting, everyone is getting home to their families after a hard day of work.”

Some might call him a vigilante or a glorified neighborhood watcher, and those people would be right. Unlike superheroes before him, Guardian Shield does not have a contentious relationship with organized authority. According to FOX 12 Oregon, police are aware of his crime-fighting ways and find him mostly harmless. They don’t encourage him to intervene in dangerous situations but appreciate him tattle-taling when trouble actually arises.

Unfortunately, Guardian Shield isn’t an abandoned orphan sitting on a billion-dollar inheritance. He’s trying to raise funds to buy his own Batmobile. On his GoFundMe page he wrote, “My current mode of transportation is my feet. I NEED A VEHICLE to help my patrols reach further into the communities. Any assistance you could provide would be greatly appreciated.” So far he’s raised $60 out of his goal of $1,000 which will most likely get him a very nice bat-mo-bike.

Despite begging for support, Guardian Shield maintains that he’s committed to his duty as town superhero. Expressing his dedication he says, “I’ll go until I am physically or mentally unable to do this anymore.”

That could be the rest of his life, that could be until he’s realized how ludicrous traversing his neighborhood interrogating strangers is. Who knows? The one thing that’s true is that Guardian Shield has a code, ““If I intervene, that means that somebody was down and nobody was doing nothing, and I’m tired of that.” He cares about his community, and that is something to respect.

With great power comes great responsibility. The Guardian Shield may not be the hero Beaverton wants, but he’s the hero they need.