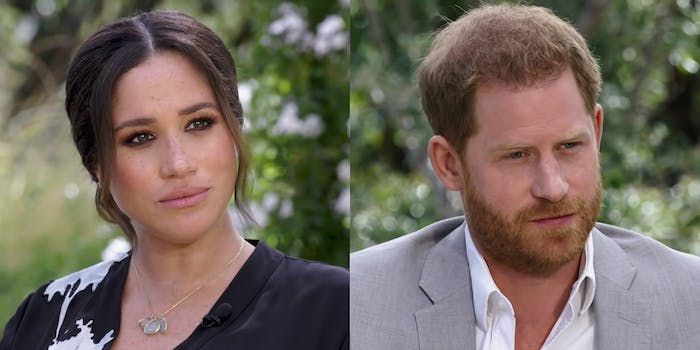 The internet had a field day.

Oprah Winfrey’s interview with Prince Harry and Meghan Markle Sunday night was must-see TV, but even if you weren’t watching, the memes gave an illuminating picture of what transpired.

The interview itself, which aired over two hours on CBS, painted a damning portrait of the royal family and the institution of the British monarchy. Harry and Markle spoke about how little they were supported by the institution itself as Markle became the subject of nasty and often outright racist hit pieces by the U.K. tabloid press, who Harry says have a symbiotic relationship with the royal family.

Winfrey was visibly stunned after Markle revealed that immediate family members were concerned about the skin color of Markle’s son Archie before he was born and that the attacks became so bad that Markle had suicidal thoughts (and then was refused help by the institution when she asked for it).

The audience who tuned in were aghast as well. But on social media, many live-tweeted and shared their thoughts on the interview in real-time, making it not only must-watch TV but also one of the biggest events on the internet of the night. On that front, it more than delivered.

For one, people really latched onto Winfrey, whose expressions not only captured how we were feeling but also how shocking the information must’ve been to have shocked Oprah Winfrey herself. Some took to imagining fake questions or answers that would get those reactions.

Some other fake questions emerged as well.

At one point, Winfrey asked Harry about how his mother, Princess Diana (who had a similar interview in 1995 that shattered the illusion about the monarchy as an institution) might have reacted to him and Markle leaving the U.K. Harry responded by noting that “ultimately, all she’d ever want is for us to be happy,” and highlighted how history was repeating itself with how the British tabloids treated Diana versus how they’re treating Markle (with additional vitriol now because of her race and social media).

But others just imagined how Diana would react to Harry and Markle burning it all down.

While the reaction from the British tabloid press has been largely predictable so far, people began to imagine just how the royal family would react to the interview by picturing someone creating a Notes app apology to Queen Elizabeth II appearing on Red Talk Table, the Facebook Watch show hosted by Jada Pinkett Smith, her mother Gammy, and her daughter Willow, to air out more dirty laundry.

And then you have all of the people watching the interview from outside of the U.S. who are only just discovering how prevalent the commercials for pharmaceuticals are in the U.S. when advertising for something like that just doesn’t happen in other countries.

Not to mention the American solidarity for Markle that popped up and a celebration to an eventual fall (in public reception at least) of the British monarchy.

While the British tabloids published stories about Markle that attempted to smear her ahead of the interview, it doesn’t appear to have hurt the interview’s ratings. According to initial reports, 17.1 million people watched Winfrey’s interview with Harry and Markle.