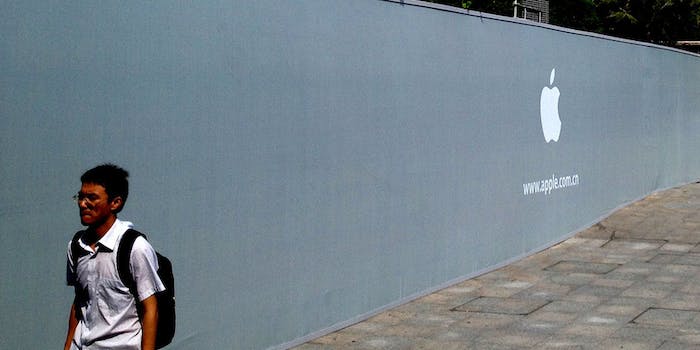 The company claims that the app, OpenDoor, is "illegal."

Apple has quietly discontinued OpenDoor, a browser app specifically designed to provide a workaround for the Great Firewall—the system of technical, legal, and social measures to control speech on the Chinese Internet.

OpenDoor’s lead developer anonymously told Radio Netherlands that on July 11, the download count for the app in China dove, from about 2,000 per day to nothing.

Despite repeated requests for an explanation Apple remained silent for six weeks. Finally, on August 28, they told the company that their app “includes content that is illegal in China.”

OpenDoor works by sending traffic through its own dedicated servers instead of using the client’s ISP. In China, those ISPs are, of course, obliged to honor the government’s content blocks.

Apple is far from the first or most egregious offenders among American tech companies when it comes to accommodating Chinese censorship directives. Yahoo shared user information on reporter Shi Tao with the Chinese government in 2004, despite having no legal obligation to do so and despite the authorities presenting the company with no warrant or other legal paperwork pretending to create such an obligation.

Cooperating with the Chinese government in this way is a wager for American tech companies. If they win, they curry favor with political bosses whose influence can secure their position in the Chinese economy. If they lose, they risk the fury of users around the world.

Yahoo subsequently struggled under a significant backlash, including among American users and wound up being called before the House Foreign Affairs Committee. and shamed in front of Shi Tao’s mother.

Apple has a mixed reputation when it comes to China. Consumers flock to buy the company’s newest offerings as they do in any country. But Apple’s use of Foxconn to build its iPhones and tablets in China has smudged the company with allegations of profiting from awful working conditions, conditions that have resulted in some suicides and riots.

Chinese social media users have already begun to condemn Apple’s actions. “Apple is determined to do well in China,” CNN quoted one Sina Weibo user  as saying. “How can Apple step in to the Chinese market without strict censorship? How can it do business without showing their sincerity (to the government)?”

Although OpenDoor remains available in iTunes outside of China, its developers fear it will disappear altogether.

“Unfortunately, we’re not aware of any app developer ever (successful) in challenging Apple’s decision,” they told CNN. “In fact, we won’t be surprised if Apple decides to pull our app from all app stores and/or terminates our account in retaliation [over the company’s public statements].”

The Daily Dot has asked Apple to explain why they maintain OpenDoor includes illegal content while Apple’s browser Safari does not. Apple did not respond.