So what does my future have in store? I got a lot of different answers. And one that actually made me worry I had a stalker.

Anyone who gives money to a psychic is, to quote Consumer Affairs, “somewhat, uh, gullible.” But what about giving money to an online psychic? Is that a better bet, since they can’t press crystals in your palm or rifle through your purse while you’re shuffling their cards? Might the results be more interesting and less predictable as they channeled their psychic impulses through zeroes and ones?

Or maybe the lack of in-person cues would make the online psychic game even more of a sham. On the Web, mediums will never know if you’re missing an arm or wearing a wedding ring or carrying a small, fitful child. They can’t tell if you’re laughing and lying through the whole conversation. My theory: It’d be a total crapshoot—their predictions must apply to every human with an Internet connection, or else they’re useless.

Either way, having random strangers see my future was very obviously a bad idea. But how bad?

For this experiment, I researched a bunch of online psychics and came up with an array of standard questions: What should my next career move be? Would my parents stay in good health? Will I be fun, single city gal for my entire stupid life? Once I got started, I immediately threw them out the window. Online psychics, I found, lead the conversation.

So what does my future have in store? I got a lot of different answers. And one that actually made me worry I had a stalker.

First up: Psychic Source. The site offers a wide selection of psychics: headshot after headshot of slightly witchy-looking middle-aged women. Of course, a Stevie Nicks look-alike is precisely what I want in a psychic.

Moira was born into a lineage of mystics; Harmony’s “talents revealed themselves after a near-death experience many years ago”; Kay’s came as naturally as brushing her teeth; Anthony became a psychic after “seeing a vision of his murdered sister’s spirit dancing in the clouds”; Cadwen was taught to read Celtic Cards at the age of 10.

I decide that I prefer a psychic who came to his gifts after a traumatic incident, like a superhero, and as such I choose Anthony.

The thing I didn’t think about with chat psychics is typing time. For the first 40 seconds of our session, Anthony was typing, which is enough time for me to think thoughts like, What if he types really slow on purpose? or What if he never writes anything at all? Finally, Anthony sent a message: “Bless you,” he wrote, “TY for calling.” I was surprised by the abbrev. “Let me shuffle up the wise cards and see what they have to say about your life and where it is going!” he said. (Typos, I learned, are all a part of the chat psychic process.)

Anthony didn’t ask me what I might want to know about, but simply launched into his reading, telling me that I am concerned with love (or as he called it, “LOVE”). I went with it and told him it was true. I mean, it’s not not true.

Anthony: This was a great source of happiness in the past…

and you are wondering about the future…

will it be like it was before? Will the demons come back with the angels?

Will he be a loyal friend as well as a LOVER?

“These are good questions,” I said. They were not good questions. I don’t have any exes I would consider reuniting with, and I am sure they feel the same—but I enjoyed Anthony’s style and flair for imagery. Plus, my interjections didn’t seem to slow or change him. He went on to tell me that soon, fate will present me with a choice, one that is the “answer to [my] deepest longing.” Here’s where I started to giggle. “Your KNIGHT of SWORDS is riding to your emoyional recue,” he wrote [sic]. “Soprry fior the tyupos.Typing fast for you.”

At this point I was so delighted that I accidentally cut off our connection. I still had six minutes of psychic insight, so I hurriedly logged back in.

Anthony launched into the rest of his vision for me. I asked encouraging questions, like “Should I trust him again?” and “How you ever be sure?” (I was typing fast, too). Anthony told me about a “vain and vicious woman” who broke my Knight’s heart and taught him about karma. This imaginary dude left me for a hotter lady? I was a little stung that Anthony thought I should put up with that shit, but I suppose that is exactly what most women who contact a psychic are looking to hear. As our time ran out, Anthony reminded me to keep God with me, and TM (thanked me) again.

Predictions: I should reunite with some dude who broke my heart in the past but who has learned humility in the interim.

Before I could begin my reading, the Online Psychic asked me to take a multiple-choice quiz about my betting habits, and a true/false quiz about my beliefs. Then I responded to some inkblots as positive or negative, identified with a color wheel, described a dream, and got briefly hypnotized by a glowing pink eye—and God, it took forever. The first quiz must be to weed out the skeptics, because any skeptic would immediately assume she is in for a scam with questions like, “Do you play the lottery?” I admitted that I do. I have a weakness for scratcher tickets. 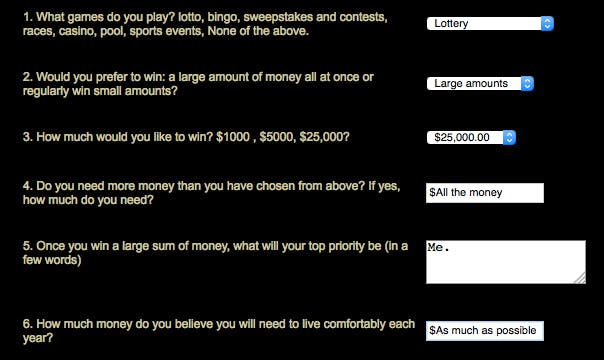 Once I finished the questionnaire, I was presented with nine psychics to choose from. I was torn between an elderly lady named Isabel and a young shirtless dude named Colby, but ultimately I chose Isabel, because I’ve already had a man psychic and also these people are fake.

When I signed into my $17.95 reading—which came with extra features like a daily horoscope and a Chinese New Year horoscope, plus the beautifully dead-end concept of lottery numbers based on your astrological sign—the screen read, “Requesting one way chat client.” I realized that, like with Anthony, I wouldn’t be asking Isabel anything. In unselectable, perfectly punctuated text, my psychic typed out my future, occasionally “erasing” and invoking my name frequently. It was pretty boring, and took, like the quiz, a really, really, just unconscionably long time. 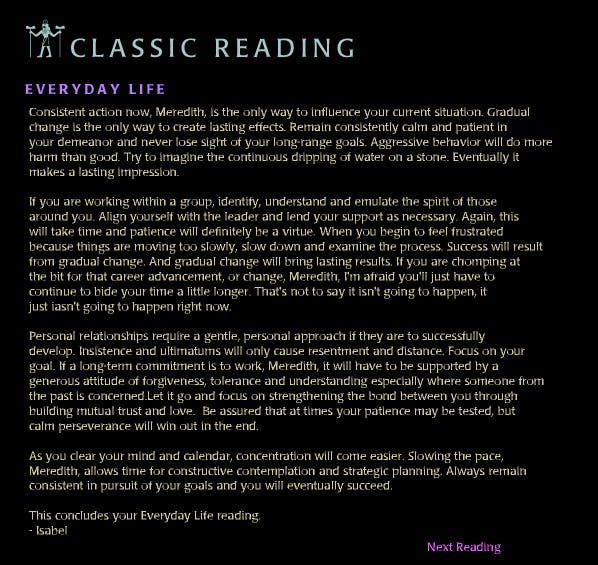 Predictions: I should be patient and nice to other humans and not emotionally blackmail any dudes (maybe exes who were rude to me in the past?). And my career isn’t going anywhere.

Sponsored by iVillage, Astrology.com is pink and spangly and offers a variety of by-the-minute psychics, as well as a special first-time user deal: 10 minutes for only $1.99. Irresistible.

I chose a pretty, bald woman with large earrings. Her name was Asiatu Healer. I was immediately delighted with this choice. She laughed (“Lol!”) a lot and used smiley emoticons with abandon. Asiatu—pronounced “ah c ah 2,” she told me—was far more interactive than Isabel or even Anthony. She asked for my name and asked how she might help me. I forgot this was an option, and found myself flustered, saying, “Well, I have a few questions, but I guess we might only have time for one.” Unsure of which of my pre-selected questions to choose, I typed, “I’m wondering what I should do about my love life.” Asiatu wanted more—was I asking about someone in particular?—and when I said no, things got mildly weird. She then described a human male I know with some accuracy, and then asked for his name. I flushed. While I was willing to admit that this was familiar, I did not want to type out his name and make it real. She told me we would make a good couple, which is certainly untrue but sort of obscurely appealing, and explained how I could make this happen.

Asiatu Healer: You would be the teacher, but that’s with most relationships, men just need leaders. Lol!

None of what she said was hard to invent or guess, but I still had that “Killing Me Softly” feeling, and so I changed the subject.

“What about my career?”

Asiatu Healer: Woah your career energy feels as if it is all over the place.

As a freelancer, I found this—Lol!—upsettingly accurate. And just like that, our session timed out. I felt unexpectedly taken aback. I had to get up and walk around in a circle.

It looks like my future is inconsistent. It seems true enough that I should be patient with my all-over-the-place career, but I don’t know how I’m going to pit my mysterious ex against my bad-idea acquaintance without emotionally blackmailing anyone. What I really found was that the super-empty platitudes were more comforting when I felt heard, and that most non-romantic advice could apply to anyone at any time. Which, duh.

Still—Lol!—I was pretty impressed with Asiatu. Honestly, I think that lady might be psychic or something.