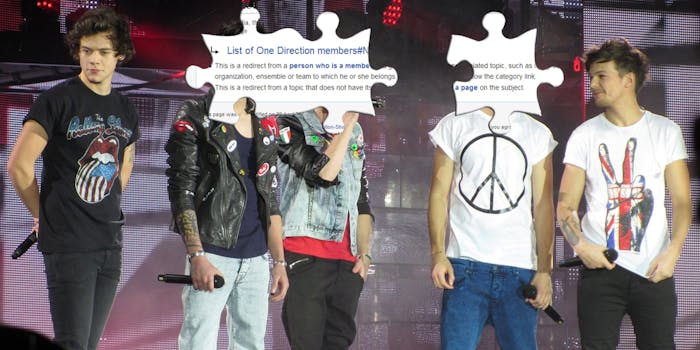 The great Wikipedia conspiracy against One Direction

One Direction, the world’s single most powerful force on social media, is being treated unfairly by Wikipedia. The band’s members—all six of them, if you count guitarist Sandy Beales (662,000 followers)—have each been deleted from Wikipedia at least once.

Even now, with the band members allegedly making racist comments, consuming drugs, and surrounded by controversy, not all the 1D boys have their own pages. Only Harry Styles and Louis Tomlinson do. The rest—Zayn, Liam, and Niall—have been deleted by anti–One Direction editors.

Young One Direction fans are even going so far as referring others to the One Direction Wiki, a dedicated online encyclopedia about One Direction where fans can create pages for the band members in peace.

Numerous deletion votes and speedy redirect decisions have been made on the band members’ pages since 2010. Disheartened fans suffer along with Zayn Malik, who’s still banned, even though he managed to do something newsworthy—smoke pot in South America. One Directioners worldwide are furious about this Wikipedia maltreatment. So why are the band members blocked? Let’s find out.

I discovered the official explanation as to why Zayn Malik has been deleted from Wikipedia countless times:

Wikipedia is so archaic. This verdict was given in 2010, and still holds. I posted the following comment using a pseudonym on May 28. I’m still waiting to hear back from the Wikipedia tribunal.

Even Zayn Malik’s redirect is humiliating: It leads to a page titled “List of One Direction members” instead of the subsection dedicated to him on the actual One Direction page.

His Payne is real. Liam Payne is suffering. He lacks even a proper talk page. For someone trending so heavily for something unrelated to music (drugs), this is highly peculiar.

Is it because he is Irish? The hashtag #NiallRaised300kWriteAboutThat about Niall Horan’s £300,000 worth of charity work was the Directioners’ reaction to the Daily Mail marijuana story. Yet he’s still sidestepped by the Wikipedia authority.

Not surprisingly, at the bottom of Niall Horan’s talk page is a fan begging to reinstate him. Below, I discovered a comment explaining why Styles is okayed but Horan isn’t:

He was deleted twice, but now Louis Tomlinson has a page of his own. In the first deletion vote, they called him a “Singer of questionable individual notability.” Ouch. “Delete and redirect” was the verdict. Then he was put back up and Wikipedia moderators again voted to remove him. Finally, he got a page. Saying the N-word helped, as it is now one of the only ways to stand out in a boy-band crowd and get recognized on one’s own merit.

Here is the first deletion vote, then followed by a second one. The pages are semi-secret and difficult to find, as Wikipedia hides them from Google. Everyone should bookmark them; all deletion dates live in infamy.

Harry Styles’s Wikipedia page should be deleted now just for fairness’s sake. He should spend some time without a page of his own just to make him feel like Liam, Niall, and Zayn. Please help nominate him for a temporary speedy deletion penalty of four years to even the playing field.

I was proud to meet Harry Styles twice in the same day: