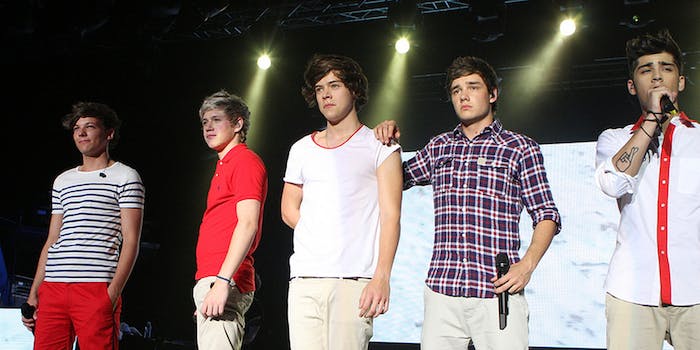 The creator of "Harry, My Cat Died," a Twitter account that retweets overzealous Directioners, is getting into standup.

Here’s something that’s sure to make One Direction fans jump for joy. Or not.

The comedian behind a Twitter account which retweets some of the inane and strange Twitter messages the British boy band gets from fans is trying to crowdfund a standup tour. The show, he says, is based on his findings after a year spent examining the minds of Directioners.

Stephen Frizzle has picked up around 5,000 followers on the account, @HarryMyCatDied, by pointing out the oddest tweets sent to One Direction, often noting whenever a Directioner is compelled to tell the members about the death of a pet. He counts Bruce Daisley, Twitter’s U.K. director, among the novelty account’s fans.

@Harry_Styles Have u heard about the death of James Gandolfini from the Sopranos?

Frizzle has turned the account’s success into a standup comedy show, for which he has a few tour dates planned, including one at the Edinburgh Fringe Festival. He’s hoping Indiegogo users will help him actually get to the shows by helping fund his transport costs for himself and the cost of hiring tour staff.

“Join Professor Stephen Frizzle from the Harry, My Cat Died Research Centre as he presents the results and findings of a year-long psychological study,” Frizzle explains. “Who are these “Directioners” who devote their time in trying to get Styles’ attention? Why does Harry …need to know when there is a dead cat in the world? Is sending a photo of your just-then dead grandma really an effective tool in getting Harry to like you? And just how scary IS a cactus?”

It doesn’t seem that many are enthused by the idea so far. With just a couple of days left to run on the campaign, Frizzle’s raised £211 of his £800 goal. He’ll get whatever he’s raised thanks to the Flexible Funding type of campaign he chose.

It might very well be an interesting, funny look at the minds of teenage girls. Let’s hope for Frizzle’s sake he isn’t looking too much into the Larry Stylinson slash fandom. It might take more than a year to figure that one out.