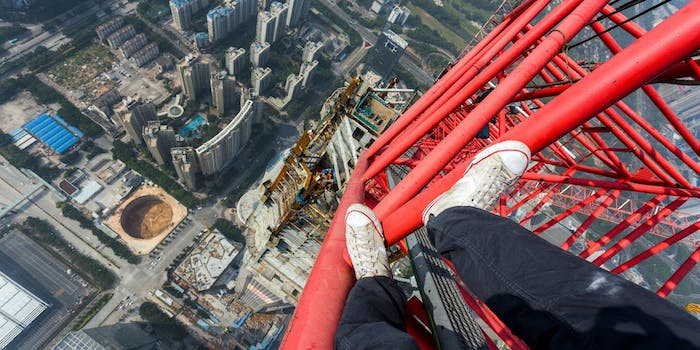 Shanghai Tower climbers are back with a new nosebleed-worthy video

The world's most daring urban explorers are climbing again.

After a year-long hiatus, On the Roofs, a daredevil-ish group of urban adventurers, are back on top.

The group has just scaled China’s Ping An International Finance Centre, which is still under construction and on pace to become the second tallest building in the world after Dubai’s Burj Khalifa.

“This time we went through a thorough preparation as we knew that not all predecessors who tried to conquer it had the luck to succeed,” the group wrote on its website. “We were quite certain that the guards of for the moment tallest building construction would have a clue that there are some Europeans out there willing to climb that building. Climb and, of course, make a video. They certainly were not willing to let us get to the top (literary) but hey what is there to stop a good plan and determined guys?”

On the Roofs, which is made up of Russians Vadim Makhorov and Vitaliy Raskalov, claims to have climbed Financial Centre during Chinese New Year.

The group last made news in February 2014 when they climbed  Shanghai Tower. The edifice was still under construction at the time but is expected to be 2,073-feet tall.

Photo via On the Roofs