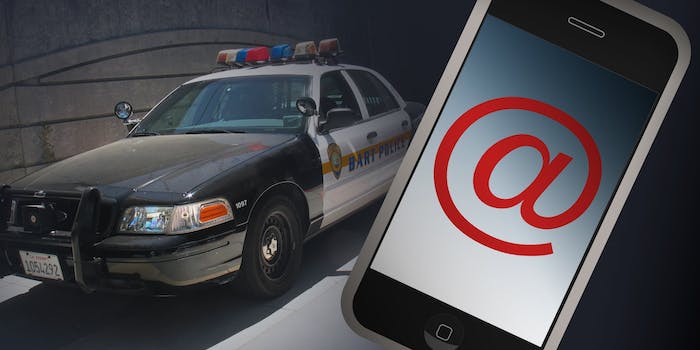 Cop who killed Napster exec while emailing will not be charged

A police officer who hit and killed the former COO of Napster with his car while using a computer will not be charged, California prosecutors have announced—because the officer was answering a work-related message.

The Daily Mail reports that Deputy Andrew Wood was responding to an inquiry about a fire investigation on his mobile digital computer (MDC) in December 2013, at which point his vehicle drifted into the bicycle lane. This “inattention” caused him to hit and kill the 65-year-old Milton Olin Jr., an entertainment attorney and former executive at notorious file-sharing platform Napster.

“Wood briefly took his eyes away from the road precisely when the narrow roadway curved slightly to the left without prior warning,” a letter from the prosecutors reads, “causing him to inadvertently travel straight into the bike lane, immediately striking Olin.”

Business Insider reports that in his initial statement, Wood “claimed that Olin had veered into his lane”—something contradicted in the District Attorney’s report.

Olin was pronounced dead at the scene.

A petition started prior to the decision has accrued almost 70,000 signatories and calls for Wood’s prosecution over his “negligence,” but it apparently hasn’t swayed the prosecutors’ opinion. Because the deputy was engaged in the “course and scope of his duties,” Los Angeles Daily News reports, no legal action will be taken.

It is explicitly illegal to text while driving in California, though an exception is made for emergency services—including the police. “Under Vehicle Code section 23123.5, [Wood] acted legally,” an official statement says.

Wood was traveling at 3 miles over the speed limit prior to the collision, Los Angeles Daily News adds, but “investigators could not determine his speed at the time of impact”—making it difficult to prove criminal negligence.

The immediate reaction to the decision has been one of outrage, with angry Americans taking to Twitter to blast the district attorney’s office for it.

http://t.co/1SvxS7nW5d – this proves that cops are above the law. they don’t have to follow the same laws as us common folk #FTP

The @MiltOlinOrg case is #bikeLA‘s Ferguson. Clearly police can kill us, and no one will be held accountable. @LADAOffice should be ashamed.

If a @LASDHQ deputy negligently fired his gun and killed someone, he’d face charges. But do it with a patrol car, and it’s just an oops.

BREAKING: driving off the road because you’re not looking is totally not negligent … if you’re an LA cop. @bikinginla @bgazzar

Olin had a wife and two sons, and they are now filing a wrongful death suit, the Daily Mail reports.

The full report from the District Attorney’s office can be found here.