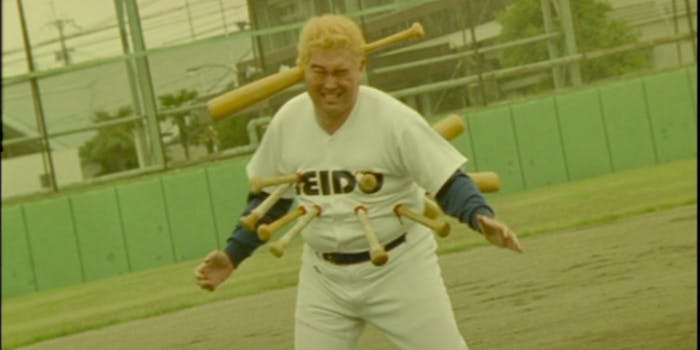 Ever think that if you blogged long enough, it would benefit the less fortunate?

That’s what Michael Clair, the man behind the blog Old Time Family Baseball attempted to accomplish this weekend.

Inspired by a similar feat this summer by Graphic Content, a comic book site, Clair blogged about baseball miscellanea almost nonstop 24 hours straight, writing a total of 37 posts from 8 a.m. Saturday to that same time on Sunday. He inserted a sidebar on his site asking for donations to Doctors Without Borders.

The experiment raised over $2,000 for the charity.

“I had no idea how well it would do,” Clair told the Daily Dot in an email. “[But] I would definitely consider the blogathon a success.”

To make it a challenge, Clair didn’t pre-write any material, though he did brainstorm a few ideas before jumping into the fray:

To keep his blog from going dark after he finished on Sunday morning, Clair recruited 20 guest writers to contribute while he slept. They ranged from a fellow blogger, who wrote seriously about measuring baseball’s popularity, to an artist redrawing the Cardinals’ logo to be proportionally correct.

In addition to helping Doctors Without Borders, the activity increased Old Time Family Baseball’s readership. The site, which averages over 5,000 unique views a month and is subscribed to by 7,000 Tumblr users, received “close to a month’s worth”of unique views “in the last two days alone,” Clair said.

That, I believe, is called a grand slam.