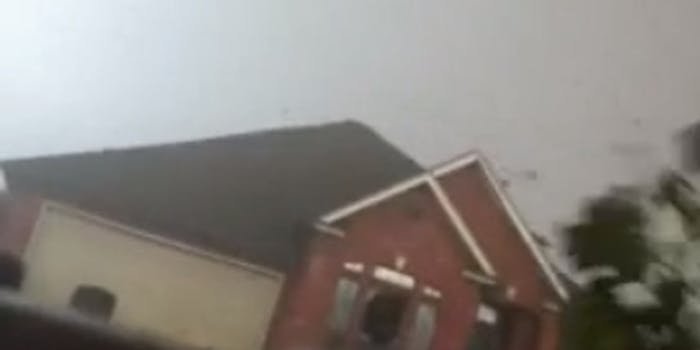 Through the cracks in a storm shelter, Charles Gifford filmed the Moore tornado that struck near Oklahoma City.

Through the cracks in a storm shelter, Charles Gifford captured some of the wrath of the Moore tornado that struck near Oklahoma City two days ago.

This tornado was classified EF5 on the Enhanced Fujita scale used to measure tornadoes by damage indicators. EF5 is the highest destructive classification on the scale, with winds over 200 miles per hour.

The tornado killed 24 people, including nine children, and injured about 240 more.

Moore’s footage of the tornado’s passage of the funnel resembles nothing so much as the tornado that took Dorothy out of Kansas in The Wizard of Oz.

The difference, of course, is the real force that you can sense in the eerie tumble of roofing, lumber, a car tire, branches and other objects.The turning of the funnel almost seems slow until you realize it is covering miles of sky.

One of the most unnerving elements of the video is its sounds. As io9 put it, “Wires can be heard snapping.” The phrase alone makes you want to duck.