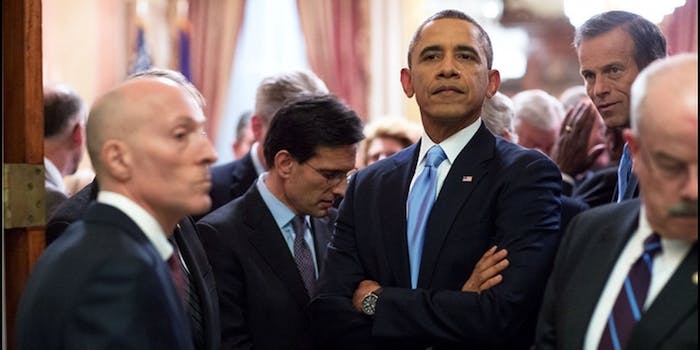 Obama: ‘The Affordable Care Act is here to stay’

Despite a shaky rollout, Healthcare.gov and other state-based exchanges succeeded in signing-up more than 7 million Americans for health insurance under the provisions of the Affordable Care Act.

President Barack Obama celebrated the achievement Tuesday in the White House Rose Garden, where he defied critics of his signature health care legislation.

“There are still no death panels, Armageddon has not arrived,” Obama said. “The debate over repealing this law is over. The Affordable Care Act is here to stay.”

The day after the close of the ACA’s first open-enrollment period, the White House announced that 7.1 million Americans had successfully signed up for insurance through the exchanges, thanks in part to a last minute surge that saw 4.8 million visits to Healthcare.gov in the final day of enrollment.

It’s a resounding success for the administration, which had originally hoped to sign up 7 million new Americans for health insurance, but was forced to scale back it’s goal to 6 million in February after an inauspicious start to the six-month enrollment period. In Healthcare.gov’s first month last October, barely 50,000 people were able to successfully sign up.

The 7 million mark is crucial. The Congressional Budget Office predicted that 7 million new health insurance policy holders would be needed to cover the cost of the ACA.

Obama himself acknowledged that things once looked bleak. At the time Healthcare.gov went live, it was immediately plaugued by well-documented technical difficulties. Users had trouble accessing the application. Even once applications were filed, there were still reports of back-end errors that resulted in customers not being enrolled in the correct insurance plan. The contractor primarily responsible for creating the exchange, CGI Federal, was booted from the project and has faced complaints from several states where the firm was also contracted to build state-run exchanges.

The president admitted to losing several weeks “out of the gate,” but said such problems are inevitable and should not undermine the law itself.

“There will be some moments when the website’s down and it’s on all your front pages,” he said, turning a scornful eye toward media coverage of the rollout.

Even the improved Healthcare.gov, which has benefitted from emergency repairs guided by Silicon Valley vets, still has it’s challenges. Glitches and crashes were reported once again on the final day of enrollment, no doubt a by product of the surge in users trying to use the site.

In the final month of the enrollment period, the president made a media blitz aimed at getting young people to sign up for insurance. The strategy included a now infamous appearance on the Web series Between Two Ferns with Zach Galifianakis. And although the guest spot may have rankled some conservatives, it’s largely being credited as a success.

Of course, not everyone in Washington, D.C., is happy about the news. Republicans like Senate Minority Leader Mitch McConnell continue to criticize the program. Congressional Republicans have tried more than 50 times, in vain, to repeal the law they’ve dubbed “Obamacare.”

“We don’t know of course, exactly what they have signed up for. We don’t know how many have paid,” McConnell said. “What we do know is that all across the country our constituents are having an unpleasant interaction with Obamacare. Whether they can sign up for a policy or not, they are discovering, of course, higher premiums, a higher deductible.”

But the president rejected such arguments. Since his first term, Obama has argued that the ACA, with its individual mandate and exchanges, will spur greater competition among health insurers and drive down the costs uninsured Americans impose on the larger healthcare system.

“In these first six months, we’ve taken a big step forward, and just as importantly, this law is bringing greater security to Americans who already have coverage,” Obama said.